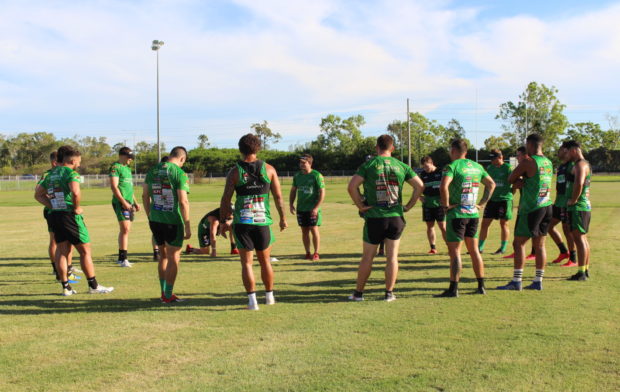 The North Queensland Toyota Cowboys will take on feeder club the Townsville Mendi Blackhawks in a scrimmage match at Ayr’s Rugby Park on Saturday, February 13.

Open to the public, the scrimmage will feature the Cowboys’ biggest names including co-captains Michael Morgan and Jason Taumalolo as well as Valentine Holmes, Kyle Feldt, Jordan McLean and Josh McGuire.

Kick-off is set for 8.45am, with the teams set to be on field for more than an hour.

Following the scrimmage, the entire Cowboys squad will move to Don West Toyota for a fan signing session from 11.30am to 12.30pm.

Cowboys members and fans planning on attending either event are encouraged to visit cowboys.com.au next week for details on COVID-safe attendance requirements.

The Cowboys’ Ayr visit is brought to you by principal partner Toyota and the North Queensland Toyota Dealers.

“Ayr and the entire Burdekin region is Cowboys heartland and having the opportunity to take the field in front of our members and fans down there is something our entire club is looking forward to,” Cowboys Head Coach Todd Payten said.

“We’re also really excited to have the opportunity to have our first proper hit-out of the pre-season against one of our feeder clubs.

“The Blackhawks have traditionally been one of the Queensland Cup’s strongest sides since their inception and we’re expecting a stern test.

“With only one official trial this year, this scrimmage against the Blackhawks is an extremely important part of our preparation for the start of the NRL season.”