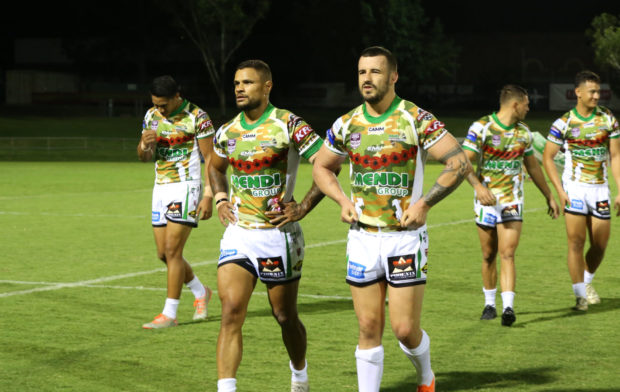 Short but sweet.  The 2020 Mendi Blackhawks season is over. Photo Jorja Brinums

The Queensland Rugby League Board has today confirmed the cancellation of its four Statewide Competitions in 2020 due to the ongoing public health emergency.

The unprecedented decision to bring an immediate close to the Intrust Super Cup, BHP Premiership, Hastings Deering Colts and Auswide Bank Mal Meninga Cup competitions was made in the interests of the health and safety of players and staff.

QRL Managing Director Rob Moore acknowledged the enormity of the decision, which comes after the initial move to suspend the competitions after Round 1 earlier this month.

“We understand the outcome is a heartbreaking one for the rugby league community, but it’s a call that simply had to be made given the current circumstances,” Moore said.

“Rugby league is part of the fabric of Queensland, and as such, we have key responsibilities to the wider community as well.

“These four competitions require a significant level of travel and accommodation across the whole state, both of which pose a risk to the health of our participants and possibly others.”

Moore said there was some light at the end of the tunnel.

“By making this announcement now, it provides our clubs with the opportunity to re-set and turn their attention towards the 2021 season,” Moore said.

“It also gives the clubs some much-needed breathing space to concentrate on important off-field matters.

“Financial sustainability is crucial for all clubs moving forward, and we’ll continue to work closely with each of them during this challenging period.”

Moore congratulated the entire rugby league community for the way it had come together during the public health emergency.

“The game is resilient – and so are our people,” Moore said.

“It’s not going to be easy, but we’re all in this together.

“We are fortunate to have the support of so many great partners, including Intrust Super, BHP, Hastings Deering and Auswide Bank.

“It is also comforting to have the backing of the Australian Rugby League Commission and the National Rugby League, as well as the Queensland Government and the game’s broadcasters, during such a difficult period.”

The Mendi Blackhawks will be addressing all players and staff.