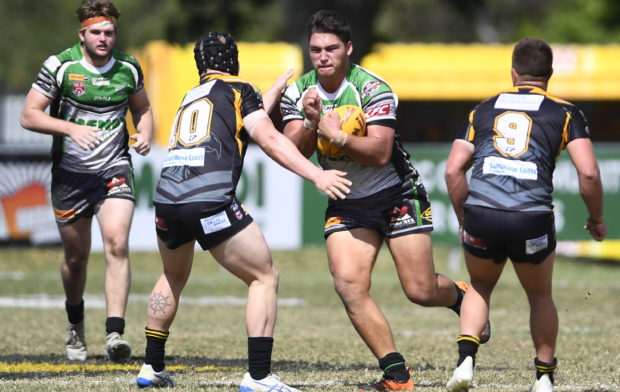 Mendi Blackhawks U20’s Wiremu Greig against the Falcons back in round 10.  Photo Alix Sweeney

It’s a major weekend of Hastings Deering Colts finals action as the top eight teams after 23 rounds of competition face off in four massive matches on Sunday.

The top four teams – Townsville Mendi Blackhawks, Burleigh Bears, Wynnum Manly Seagulls and Sunshine Coast Falcons – participating in the post-season won’t face elimination in Week 1, with a victory this weekend giving them a week off before an elimination final in a fortnight’s time.

Claiming the title of minor premiers for the second year running, the Townsville Mendi Blackhawks will travel down to Sunshine Coast Stadium this weekend to take on the Sunshine Coast Falcons.

“We are definitely excited to be where we are, the Falcons did us a favour when they beat the Bears two weeks ago, but now we have to work hard and be at our best for the finals,” Elliott said.

The other qualifying final will see the Bears take on the Wynnum Manly at BMD Kougari Oval in what should be a classic match, with the two sides only separated by points difference after 23 rounds.

The Bears led the competition from the early weeks, with Wynnum Manly and the Mendi Blackhawks hot on their tails as all three teams went into the final game week of the season with a chance at claiming the minor premiership.

“We didn’t find out until we were on the plane home that we had won the minor premiership,” Elliot said.

“We have taken every week in our stride and kept trying to perform to our absolute best each week, the Falcons are a great side and over the season, our results have been one win and one loss so it’s going to be a challenge to play them at home.”

With minimal training sessions left before this weekend’s match up, Elliott said his team had prepared to their best ability ahead of the finals’ series.

“This time of year, every team will be bringing their best, we have to be at our absolute best and make sure we are training with no complacency in the group,” Elliot said.

“We have a really genuine group of blokes in this side, our previous Queensland (Intrust Super) Cup experience has really given us the chance to perform well and make the finals series.”

A win this weekend will propel two of these four teams to the preliminary finals in two weeks, with the losing pair facing off against the winners of the other two elimination finals match ups also on Sunday afternoon.

The action starts Sunday on 12.15pm from the Sunshine Coast Stadium.