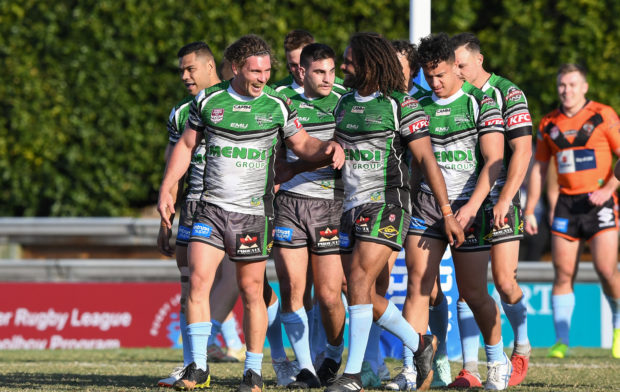 Top eight teams Townsville Mendi Blackhawks and Easts Tigers both came out firing at Langlands Park this afternoon for the last round of the Intrust Super Cup season.

The Tigers were unable to get the home win for retiring players Jake Foster, on the sideline with a knee injury, Shane Neumann, playing his 200th game, and Jarrod McInally, with the Mendi Blackhawks winning 22-20.

Mendi Blackhawks coach Aaron Payne said his team was lucky to get the win after a far from clinical performance; he said the close encounter was “a wake up call leading into finals”.

Payne said he believed excitement about finals led to complacency.

“It’s the ultimate mistake as a group, thinking about next week,” Payne said.

“There was some real uncharacteristic things that happened that I haven’t seen for a long time, but the positive today was we found a way to win when we were under pressure.

“Full credit to the Tigers, they really turned up. They had a lot to play for. They were wanting to send some really important people, who have been part of their club for a long time, out the right way here at home.”

Mendi Blackhawks captain Shaun Nona said “it was a bit rusty on our end… we didn’t play our best, but we still came away with the result, so that’s pleasing”.

“I thought our five-eighth Jaelen Feeney was really good today. Him and our right edge really controlled our kicking and our kick chase. I think they led the way for us today,” Nona said.

“I think it’s good to get the win going into finals. We won last week as well, so having two wins leading up to finals is a huge boost for our morale.”

Mendi Blackhawks wrecking ball Tom Gilbert, who scored one of the Blackhawks’ four tries, said it was a “tough contest” – one he was very happy to win.

“We knew Easts were playing for a bit today… we were prepared and they gave us everything. We stayed tough, stayed resilient and gave an 80-minute performance, which is what we’ve been working for,” Gilbert said.

“I think we’ve still got some work, unfortunately, to do, but we can do that.”

The game, which saw players and officials wear blue socks for the Turn to Me round, was fiery from the outset, with the Blackhawks’ Jaelen Feeney crossing the line first and Nona converting to take the Blackhawks to a 6-0 lead.

Tigers debutant Peoples scored in the 29th minute and Walters missed the conversion. The score sat at 6-4.

Mendi Blackhawks’ Temone Power was next to cross in the 38th minute and Nona converted to take the half time score to 10-4 to the Blackhawks.

Dan Beasley, off the bench for the Blackhawks, was first to score after the break, crossing under the posts and Nona made it three from three conversions to take the score to 16-4.

But Easts did not take the foot off the pedal and Walters crossed in the 51st minute; Sam Foster failed to convert and the score sat at 16-8.

Gilbert then scored for the Blackhawks to even the score and Nona converted to take the score to 22-20.

The Blackhawks were victorious.