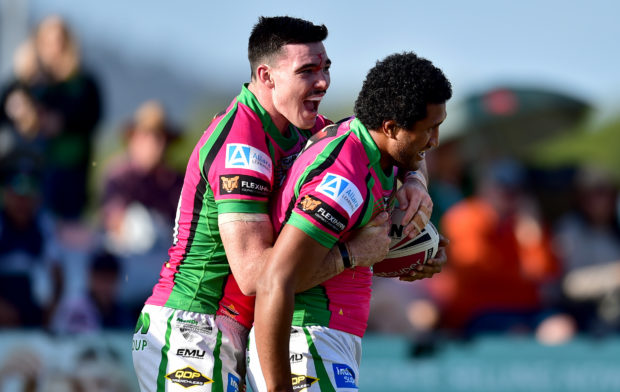 The Townsville & Districts Mendi Blackhawks have secured a top 4 finish with an inspiring 22-18 victory over Wynnum Manly.

Wynnum began the game strongly scoring a try in only the second minute of the game, a further try in the 20th minute saw the visitors take a commanding 12-0 lead.

A try to Kalifa Fai Fai-Loa in the 25th cut the margin to six, but the game was tipped upside down following the decision from the match officials to send off interchange forward Krys Freeman in the 37th minute.

A committed 12 man Mendi Blackhawks refused to surrender and hit back in the 49th minute with a solo try to Josh Chudleigh, bringing the strong crowd at Jack Manski oval to their feet.

Shaun Nona bought up 300 goals in the Intrust Super Cup when he added the extras to level the scores. The Mendi Blackhawks suffered another setback when the Seagulls went the length of the field in the 54th minute, scoring a try against the run of play.

With everything seemingly going against them, the Mendi Blackhawks refused to yield, levelling the scores in the 73rd minute through Bacho Salem after a sublime pass from Shaun Nona.

A frantic final seven minutes went down to the wire, before Zac Santo dived over in the corner to seal an unbelievable win in the 79th minute.

At the post match presentations, coach Aaron Payne described the win as one of the best he has been involved in either as a player or a coach.

Josh Chudleigh claimed man of the match honours after playing the entire game in the middle of the field, but it would be impossible to find a Mendi Blackhawks player who did not contribute to one of the best wins in recent history.