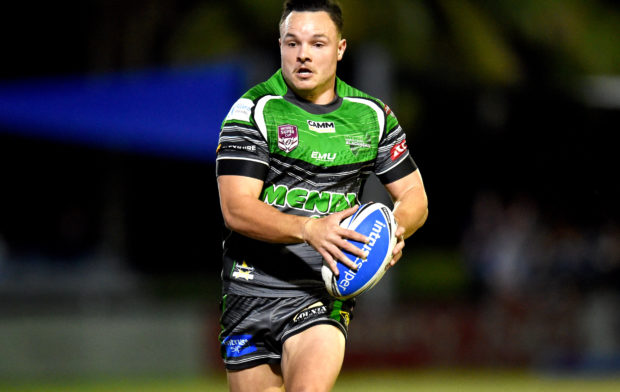 Jaelen Feeney scored a hat-trick in his side’s 32-6 over the Capras on Saturday.  Photo from RD 17 by Alix Sweeney

THE Townsville Blackhawks are counting the cost of Saturday’s 32-6 win over the CQ Capras after losing forwards Sione Lousi and Cade Maloney to potentially season-ending injuries.

The Mendi Blackhawks notched their club record-equalling eighth win in a row against the last-placed Capras in Rockhampton as five-eighth Jaelen Feeney scored hat-trick.

But coach Aaron Payne conceded it was a sombre mood in the dressing rooms after the game with Lousi (broken arm) and Maloney (torn hamstring) both facing at least six weeks on the sidelines.

It is a particularly bitter blow for Maloney who was playing only his second game of the season after a troublesome bone bruising injury which he suffered during the preseason.

Both Lousi and Maloney could get back on the field this season should the Mendi Blackhawks make a run deep into the finals, but Payne said it was still a devastating blow for the team.

“Despite us winning convincingly I think everyone was pretty shattered for them, particularly Cade,” Payne said.

“He’s spent the whole year pretty frustrated, but he’s persevered and worked hard to get back playing footy this year which at one stage it looked like he wasn’t going to.

“Both games he was outstanding for us and then to do his hammy. He’s done it pretty bad so I’d be very surprised if he’s back this year and Sione’s the same.

“He’s a massive part of our side. He gives us a real impact off the bench, he’s a big body and very aggressive.

“I’m sure they’ll do everything they can to try and get back to play finals footy, but I’d rather have given away the two points (against the Capras) and have both those guys fully fit to be honest.”

Payne described the clash with the Capras as a “danger game” for the Mendi Blackhawks as they prepare to take on the all-conquering Sunshine Coast Falcons next weekend in the Queensland Cup’s game of the round.

The coach admitted his side still lacked polish in attack at times, but he was pleased with their defensive efforts to keep the Capras to just one try late in the game.

“I know there’ll be a lot of boys looking forward to play the Sunny Coast next week and when you start thinking like that it’s fraught with danger so it’s pleasing that we got the result,” Payne said.

“We created plenty of opportunities and we probably didn’t make the most of them to be honest, but in saying that we still played some pretty good footy. We did what we had to do.

“Probably the most pleasing part was our defence. It was just a nothing try at the end right on the hooter that was from one of our errors so take that away we keep them to zero.”