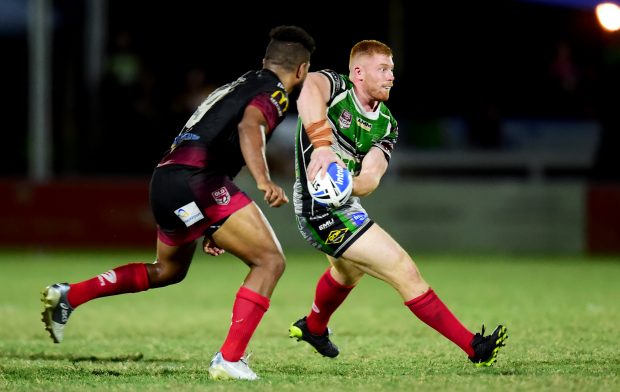 The Townsville Mendi Blackhawks made it four wins on the trot, after they overcame the Mackay Cutters 22-6 in wet conditions at BB Print Stadium in Mackay tonight.

In tough conditions, it was the Mendi Blackhawks who made the most of their limited opportunities, as they faced a Cutters outfit who are currently fighting to keep in touch with the top eight, after an inconsistent 2019 season so far.

It was a crucial win for the Mendi Blackhawks, as they continue to climb the Intrust Super Cup ladder, with the Norths Devils hot on their heels for that crucial top four finish.

The Blackhawks opened their account first, when halfback Shaun Nona pounced on a dropped ball to go over untouched in the 11th minute; before then converting his own try to give his side an early 6-0 lead.

It wasn’t long before the Cutters had a reply of their own, when Jack Brock crashed over thanks to a lovely short pass from hooker Jayden Hodges in the 18th minute. Carlin Anderson successfully converted.

The Mendi Blackhawks then hit the lead once more when Bacho Salam slammed down a Nona grubber in the 27th minute, with Nona successfully converting the try.

A penalty gifted the Mendi Blackhawks good field position, and they were quick to make the Cutters pay when second rower Temone Power sliced through off the back of a lovely Jaelen Feeney offload, to give his side an 18-6 lead heading into the break.

The greasy conditions made ball control the number one priority in the second half, but errors and penalties made it hard for either side to build pressure late in the game.

Despite having Michael Bell in the sin-bin, the Mendi Blackhawks were able to extend their lead when Salam crashed over for his second try in the 51st minute, to give his side a comfortable 22-6 lead.

That was to be the only try of the second half however, as the Mendi Blackhawks were able to grind out the hard-fought victory against a gallant Cutters side.

The Mendi Blackhawks will look to maintain their winning streak when they take on the Northern Pride at Jack Manski Oval next week.