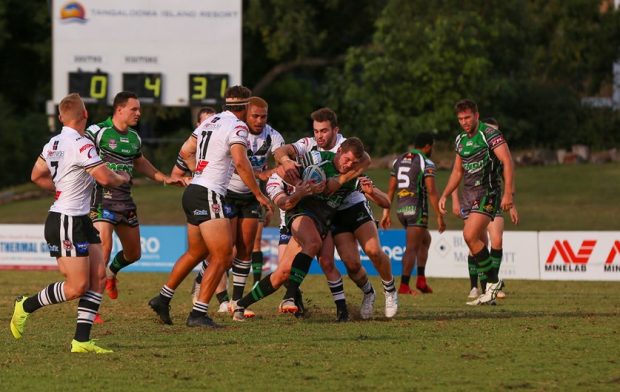 Thomas Gilbert in action for the Townsville Blackhawks in their 28-14 win over Souths Logan.  Photo QRL Media

The clash shaped as a must-win game for the Mendi Blackhawks, who were looking to cement their place in the top eight after an inconsistent start to the season.

An early injury to Kyle Laybutt didn’t stop the Blackhawks from dominating the early stages, as both Michael Carroll and Temone Power crossed the line in the sixth and 13th minutes.

The Magpies replied through winger Matt Soper-Lawler in the 20th minute, to get their first points of the afternoon.

A late first half try to Souths fullback Guy Hamilton in the 38th minute added some respectability to the score line heading into the sheds – with Townsville leading 22-8.

The Magpies refused to go away after the break, with Soper-Lawler snaring his second try soon after the break and Hamilton adding the extras to make it 22-14.

However, it was the Blackhawks who had the last laugh when high-flying winger Kalifa Faifai-Loa crossed in the 64th minute, with Shaun Nona again knocking over the extra two points.

Mendi Blackhawks coach Aaron Payne was pleased with his side’s attitude and ability to grind out a tough victory, despite absorbing plenty of pressure in the second half, from a fast-finishing Magpies side.

“It was a really tough win from our boys,” Payne said.

“We certainly made it hard on ourselves, and we can be a lot smarter, and not put ourselves under the pump defensively so much.

“We were down to one player on our bench at the end of the game, but we just kept turning up for each other.”

Payne was especially impressed by Chudleigh’s effort, with the hard-working hooker producing an impressive 80-minute performance.

“He was certainly was one of our better players today.”

Having only won back-to-back games once this season, Payne said he was hoping his side could start stringing some wins together when they face the Ipswich Jets at Jack Manski Oval next week.

The Mendi Blackhawks Under 20’s will go in to next week’s bye round with a solid 44-12 win over Souths. The win gives them 3 wins from their last 3 games.