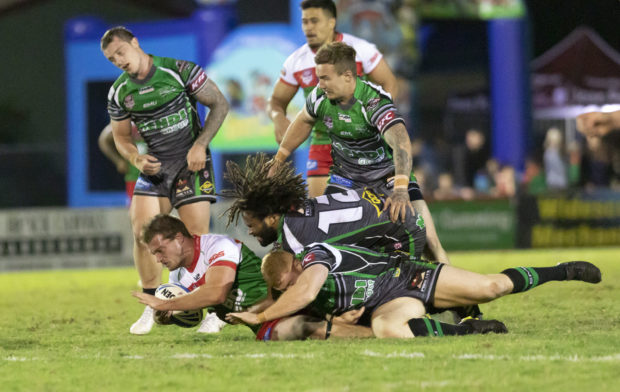 TOWNSVILLE Mendi Blackhawks coach Aaron Payne has challenged his side to improve their consistency across the 80 minutes following a disappointing 28-12 defeat to the Wynnum Manly Seagulls.

The Seagulls had never beaten the Mendi Blackhawks in five previous clashes, but they broke that drought in style at Kougari Oval on Saturday as they also notched their sixth win in a row.

Wynnum Manly made a dream start as fullback Edene Gebbie sliced through Townsville’s defence to score the opening try in just the second minute of the game.

Backrower Temone Power capitalised on an error from Gebbie to put the Blackhawks in front before Seagulls centre Richie Kennar crossed the stripe to reclaim a 10-6 lead at halftime.

Hooker Mitch Cronin scored a simple try from dummy half soon after the break before Kennar grabbed his second just moments later as the Seagulls shot out to a 22-6 advantage.

The Blackhawks had their chances to hit back as they were camped on Wynnum Manly’s line before backrower Matiu Love-Henry scored to put the result beyond doubt for the home side.

Winger Michael Carroll claimed a consolation try for the Blackhawks, but Payne conceded their execution had let them down after having a wealth of field position during the game.

“If you looked at the score line you’d probably think they were in control the whole way, but we were certainly the far better side in the first half,” the coach said.

“We had about five try-scoring opportunities that we didn’t take and didn’t execute, but we were completing at a high rate. We had all the field position and all the possession.

“We were unlucky not to go into the break with a pretty healthy lead. I don’t know if that affected us in the second half, but we went away from what was working well for us.

“Probably the disappointing part for the whole game was we didn’t show much resilience.

“The biggest thing we need to be better at is just consistency in everything we do. There’s a lot of times that we’re playing well, but we’re just struggling to do it for 80 minutes.”

Cowboys-contracted lock Tom Gilbert was a standout in a beaten side for the Blackhawks as he punched out 215 run metres along with 31 tackles.

Payne also praised the efforts of hooker Josh Chudleigh, who finished with seven dummy half runs and 20 tackles in a busy 66-minute stint as he works his way back from a horror run of knee injuries.

“I thought he probably had his best game for us and he’s certainly improving every week,” Payne said.

“It could’ve been easy for him just to give it all away, but it’s fantastic that he’s back playing some really good footy and every week he’s building his minutes back up.”

Originally published in the Townsville Bulletin