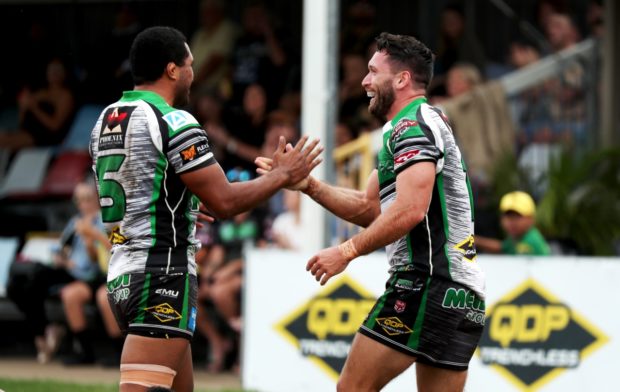 The sky was dim and grey over Jack Manski Oval this afternoon as the Townsville Blackhawks took the field against the Easts Tigers.

The weather set the tone for the game, with the home side eager to shake off last week’s upset home loss and reclaim an enviable position in the competition.

Within the 16 minutes of game play, the Blackhawks made their presence known with a try from Zac Santo paired with a successful conversion from Shaun Nona.

Establishing a consistent flow, Corey Jensen secured another try for the Blackhawks under the posts, making the score 12-0.

This momentum continued for the Blackhawks, with Kyle Laybutt using good strength close to the line to score.

The Blackhawks led 16-0 at half-time.

As the second half kicked off, the Tigers were determined to bear claws.

They did just that with a try to Jarrod McInally after the Blackhawks spilt the ball over the line; Tom Hughes successfully converted the try to take the score to 16-6.

The Blackhawks did not stay down for long. Jake Marketo commanded ownership of the ball, obtaining his third try for the season, running off a great short pass from Shaun Nona.

The Blackhawks showed the true grit in their attack, with tries Bacho Salam and Michael Carroll scoring tries within the next 10 minutes – both off good passing raids.

A break in the clouds saw the light shine through for a solid Blackhawks 30-6 win – the Blackhawks’ seventh win for the season.

Earlier in the day the Blackhawks’ Hastings Deering Colts team also returned to the winner’s circle with a hard-fought 14-6 win over the Tigers.

The Blackhawks’ Intrust Super Cup team takes on Wynnum Manly Seagulls in Round 12.