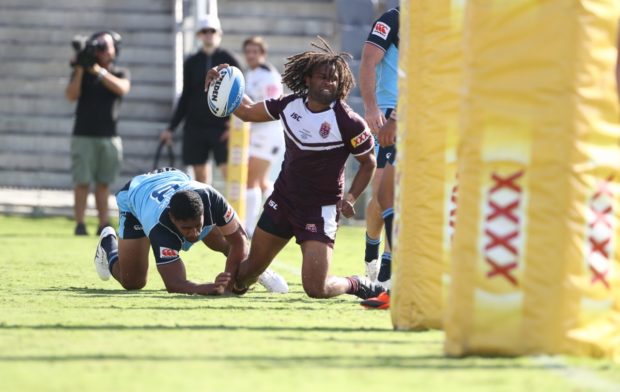 Temone Power scores for the QLD Residents over their 42-22 win over NSW.  Photo QRL Media

The XXXX Queensland Residents have claimed a 42-22 win over NSW in their interstate challenge match.

The win was set up by a strong first half where the home side got out to a 22-6 lead, with centre Delouise Hoeter scoring an early double.

The “Rumble in the Peninsula” came to Dolphin Stadium with Queensland looking to take back interstate supremacy after losing the Residents clash in 2018 by knockout 36-20.

Queensland had several changes with Storm trio Harry Grant, Billy Walters and Pat Kaufusi being withdrawn from the team, while Bears ace Jesse Arthars was also withdrawn, due to his NRL call up to the Gold Coast Titans.

Jets prop Nat Neale and Wynnum’s Mitch Cronin were the sole incumbents from the 2018 Queensland representative team; while the Blues had two players returning for another shot at Queensland in 2019, Rabbitohs’ forwards Billy Brittain and two-try hero from last year Dean Britt.

Both Blues were no strangers to the strength of the Intrust Super Cup, with Brittain having played for Norths, while Britt played for Easts.

It was a good start for Queensland and it only took nine minutes for the side to take advantage of three penalties in a row, marching down the field.

Halfback and player of the match Sam Scarlett made an incision, spotting the big Blues Lloyd Perrett in the line. On the back of the quick-play-the ball, Santo put in a neat kick and lobbed a pass over for Delouise Hoeter to score.

Queensland had the dream start and were leading 6-0.

Drawing on the inspiration of another famous Queensland number 6 captain; Cleeland turned NSW around with a dominating kicking game that had them bringing the ball off their own line.

Connor Tracey made the mistake and Queensland capitalised when Scarlett again went to the line and found his outside men with space.

His Wynnum Manly team-mate Hoeter scored two tries in the 2017 Residents game and he was in try-scoring form again; with his second try giving Queensland a 10-0 lead.

The home side were not finished yet and led 16-0 when Scarlett again made the break on the back of a Neale off-load and a ragged defensive line. The halfback scooted away to score down the NSW left hand side again.

The Queensland forwards were moving the piano around the field and Scarlett was playing the tune.

He went to the right again trying to exploit the Blues left hand side and showed plenty of guile when he got Townsville’s Temone Power to show plenty of power himself. He hit the line and threw his body over to score, taking three Blues with him.

Just before half time Queensland now up 22-0.

However, the NSW Residents had the final say in the half when Morgan Harper put a kick in which evaded Queensland fullback Santo and Newcastle’s Beau Fermor, who played for the Queensland Under 20 side in 2018, scored to give NSW a sniff.

At halftime, Queensland led 22-6 on the back of 23 sets and four tries.

However, despite being disappointed to let in a late try, XXXX Queensland Residents coach Jon Buchanan told the QRL after the match that he had faith his side would withstand the NSW fightback.

At the break, the NSW staff spoke about pressure, while the Queensland team call was about not being too happy with the lead.

The visitors had to get back in this game with a good set to start and their forward Keaon Koloamatangi took the job on.

They were able to build pressure through the middle, giving Brock Lamb space to provide ball for winger Brian Too to score in the corner and NSW were surging thanks to back-to-back tries.

They narrowed the led again with another try making it two in the first 10 minutes of the second half.

It was the NSW forwards taking back the momentum of the game when Britt scored slamming the ball down after being turned under by Tracey.

They had made more than a game of it and had narrowed down the lead to 22-16.

Cleeland got the half moving for Queensland though when NSW had to stop Cronin under the posts; their line was broken and staggered not moving, and Cleeland stepped around the defenders to score.

Queensland forced NSW to drop out to them and with pressure building, Scarlett went to the air for his outside backs to miss the ball – but Hoeter crumbed along behind and showed great hands to pull the ball in and score in the corner to claim his hattrick.

The Intrust Super Cup representative side were back to a healthy lead – 34-16 with 20 minutes to play.

The fight became real when New South Wales and Queensland traded punches. NSW s would play 10 of the last 14 minutes with 12 men when Harper was sin binned for using his fists.

Queensland cooled the situation with a penalty and two points, giving them a 20-point lead 36-16 with 10 minutes to go.

However, the game was still rolling along and NSW half Tracey found his big forward Koloamatangi off his hip and had the try for the Blues.

Townville’s Corey Jensen was determined to finish the game and bulldozed his way over to get Queensland to 40 points.

Cleeland added two more taking his personal contribution to 18 points in the 42-22 win. 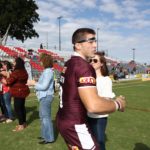 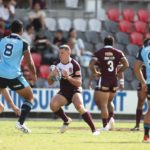 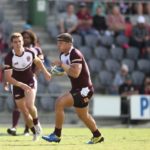 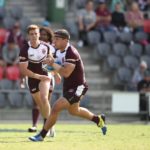 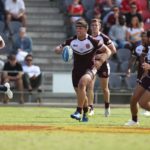 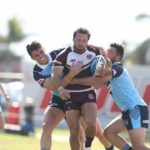 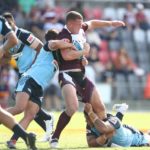 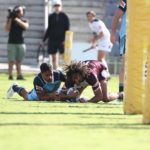 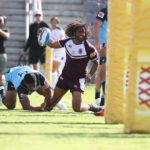 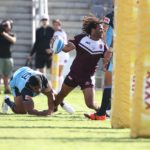 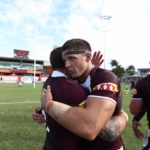 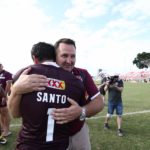 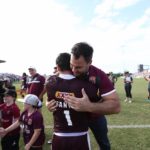 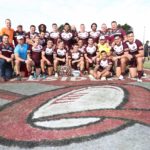 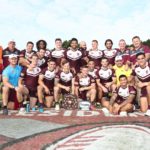 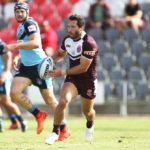 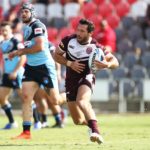