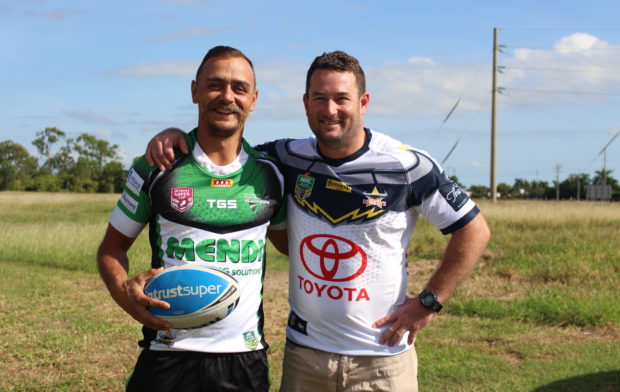 The Townsville & Districts Mendi Blackhawks have this morning announced that their Intrust Super Cup round 6 match against the Redcliffe Dolphins this Saturday, will be a fund raiser for the devastating floods that hit Townsville and regional areas in February.

Brothers Leagues Club, Townsville will donate $3 from every ticket sold at the gate, plus a further $5,000 to be equally shared between the SES Townsville and the QLD Country Women’s Association, QCWA.

CEO for the Mendi Blackhawks, Justin Wilkins, said there was plenty of activities throughout the day, with the highlight being a Cowboys Old Boys V Mendi Blackhawks Invitational team charity game, kicking off straight after the main game.

“This day will be a wondering opportunity to give back to our community,” Wilkins said.

“How good will it to see names like Bowen, Payne, Tate and Bowman running around together again, as well some of our Mendi Blackhawks inaugural players and TDRL players.”

The Redcliffe Dolphins have also generously donated to the day, with donations made on behalf of the staff of the Redcliffe Leagues Club who have pooled their tips over the last year.

“Our Staff always donate their tips to a worthy cause, and when we got news of the flood disaster that hit Townsville earlier in the year we knew we wanted to help out,” Dolphins CEO Tony Murphy said.

Popular Townsville band “Zacariah” will also be playing straight after the game to keep the night going.

“We would love to see as many people as possible come out to the game,” Wilkins said.

“It might be the last time you get to see these legends play together, and it’s for a good cause.”

Teams for the Charity Game will be announced soon.