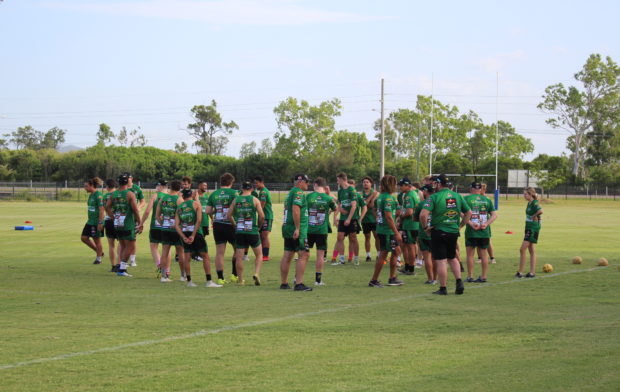 It’s been 189 days since the Mendi Blackhawks last faced off against the Ipswich Jets in round 1 of the semi finals, and this weekend they meet again for round 1 of 2019.

According to new Coach Aaron Payne, prepping for the 2019 season has been a “long, hot, and wet” process, with torrential rain forcing them to hit pause.

“We have a really healthy squad to start the season, and some positions were difficult to choose, and a few guys have been unlucky to not be selected.”

“The main focus for us as we go into Sunday, is to make sure we prepare well.”

This game will see the teams paired against each other for a fourth time in Ipswich—a place where both teams have respectively won two games each, with Mendi Blackhawks scoring 41 tries and Ipswich scoring 42.

The game falls on Defence Force Appreciation Day, a day with holds particular significance for the Mendi Blackhawks and the Ipswich Jets as they both hail from garrison towns. 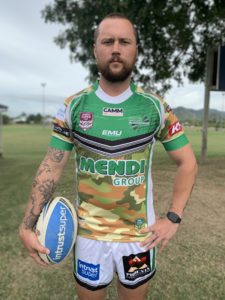 Michael Parker-Walshe wearing the camouflage jersey to be worn by the team this weekend for Defence Force Appreciation Day.

To honour the day, both teams will don customised camouflage jerseys.

Back from the break will be the return of inaugural Mendi Blackhawks player Michael Parker-Walshe.

“He’s a fantastic player, and we’re happy to see him make a comeback to the ISC competition,” Payne said.

“His experience at this level is great for the team both on and off the field, especially for the younger players.”

Parker-Walshe has previously played 61 games with the Mendi Blackhawks, including a member of the 2015 grand final team.

“Having the year out of ISC has given my body the rest it needed,” Parker-Walshe said.

“I feel mentally fresh and ready to go, but we will see how I feel after 12 rounds.”

“It’s always a good tough game against Ipswich, so I’m really looking forward to the challenge.”

“We have worked really hard this pre-season and I cannot wait to get back out there.”

The Mendi Blackhawks kick off their season this weekend against the Ipswich Jets this Sunday, March 10th: