The Townsville & Districts Mendi Blackhawks have committed to the development of Rugby League coaches and players in Townsville and regional areas, by appointing a full time Development Officer at the club.

Tim Nugent, who is a born and bred Townsville local, commenced the role in November and has already made an impact, attending regional sign on days and conducting coaching updates in these areas.

“My goal in this position is to reach as many Rugby League coaches as possible within our footprint,” Nugent said.

“We understand that although we may not be able to reach every player directly, by conducting regular coach updates, this will filter through to the players.”

A former Townsville Brothers Junior and Senior player, Nugent first commenced coaching at the age of 24.

“My first job was coach of an under 6 team, which I really enjoyed,” Nugent said.

“From there, I went on to coach older age groups, including working with the AIS and North Queensland Cowboys Academy, before eventually landing a full-time position with the QRL as a Development Officer,”

“My main role was Coach Education, which I believe is one of the most important roles in Rugby League.”

Nugent remained in this role for 8 years, before returning to Townsville Brothers, when the role of Football Operations Manager became available.

Through time, the role of Football Operations Manager changed to Development Officer, where Nugent was responsible for providing support for coaches and volunteers at the club, as well as player development.

“We want all rugby league players to have the opportunity to reach their full potential, and to do this, the coaches must be knowledgeable and supported,” Nugent said.

“My new role with the Mendi Blackhawks is to continue doing this, but now I have the opportunity to reach more clubs and schools where possible,”

“It’s our charter to ensure all team staff and players in the Townsville Rugby League District know they are a part of the Mendi Blackhawks pathways,”

“And I will be here to support them to make the system sustainable.” 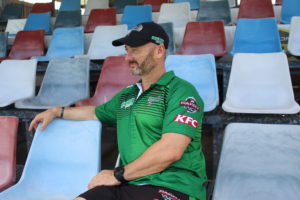