The 2019 Mendi Blackhawks Intrust Super Draw has been released today, with 11 home games penciled in for Jack Manski Oval.

The season kicks off with the team travelling to Ipswich to take on the Jets, followed by Tweed, then up to Cairns for the Northern Pride.

Mendi Blackhawks Football Operations Manager Adrian Thomson, said he is pleased with the draw, however, supporters will have to wait until Round 4 for the first home game on Sunday, March 24.

“We are happy with the draw this year,” Thomson said.

“With the weather being so unpredictable at this time of the year, having our first 3 games away could be beneficial to us.”

“It’s our 5th year in the competition, and it’s going to be an exciting year for us,”

“We also have our first Friday night game against Mackay, under lights at Jack Manski Oval in Round 5.”

The draw will see the Mendi Blackhawks receive a home game for the ANZAC Day Weekend.

“Named after the Black Hawk Helicopter and being a garrison town, it’s important to us and to Townsville that we have an ANZAC Day home game, so we are really happy that we received this,” Thomson said.

The draw will also see the return of the PNG Hunters back in Townsville, for the Round 19 Split Round on the weekend of August 3-4.

Coach of the Mendi Blackhawks Aaron Payne said he is looking forward to commencing his new role in season 2019.

“The team is having a really good pre-season so far, and everyone is looking forward to the season starting,” Payne said.

“The thing I’ve noticed over the years is the strong support that the Mendi Blackhawks get at each game.”

“I’m really looking forward to meeting all of our existing and new sponsors and members.”

Other highlights of the Mendi Blackhawks 2019 draw include:

As well as the XXXX Rivalry Round, Women in League Round and the Red Sox Round.

The Auswide Bank Under 18’s Mal Meninga Cup and Hastings Deering Colts Under 20’s draws will be released on Thursday 13 December at 10am. 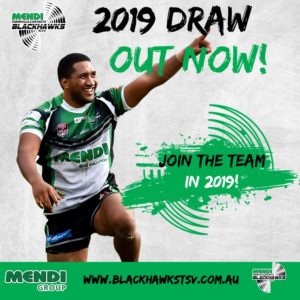