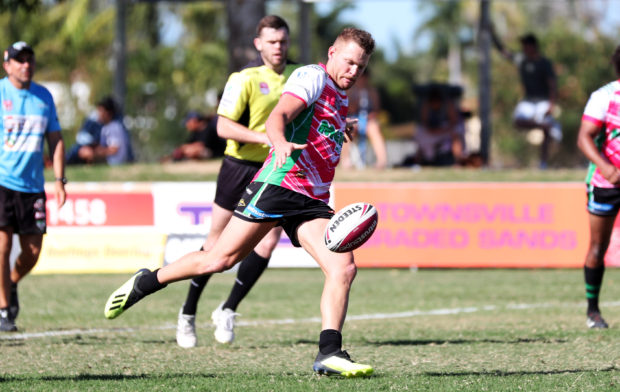 North Queensland Toyota Cowboys back Shaun Hudson believes his Queensland Cup team the Townsville Blackhawks need to make a return to their early season form if they are to finish in the top two.

With only two games remaining in the regular season of this year’s Q-Cup, the Blackhawks sit in second place, just one point behind the Redcliffe Dolphins.

With the team having dropped their last two games, Hudson said they need to string two good performances together leading into the playoffs.

“The last couple of weeks we probably haven’t played the way we wanted to,” Hudson said.

“It is only one or two points separating the top four, so it’s a really crucial time to get the two points, especially going into the week after against Wynnum Manly and trying to secure the minor premiership.”

Hudson, who played five-eighth for the first time since Round 16 in Saturday’s two-point loss to Redcliffe, said he’s happy to get more involved in the play.

Hudson had a season-high 139 kicking metres, along with five tackle breaks against the Dolphins at Jack Manski Oval.

“It always helps when you are involved around the footy a bit, rather than out in the centres and waiting for it,” the 23-year-old said.

“It is good to be on the footy a bit more and be able to have a bit more freedom.”

Hudson said the Blackhawks’ defence has been a huge reason for the team’s position on the ladder.

The Blackhawks have allowed a competition-best 304 points this season, 56 points fewer than the top-of-the-table Dolphins.

“It’s been massive,” Hudson said on how much confidence the team has gained from their defence this year.

“We probably haven’t been up to scratch the last couple of weeks, but we know what we can do.”

The Townsville Blackhawks travel to Pizzey Park to take on the Burleigh Bears this Saturday afternoon (4:15pm), before finishing the regular season against the Wynnum Manly Seagulls at BMD Kougari Oval the following Saturday (5pm).