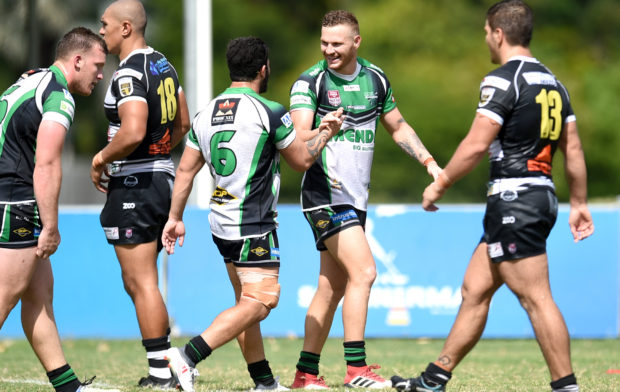 Photo by Alix Sweeney from the Round 5 clash between Blackhawks and Tweed.

The Townsville Townsville Blackhawks now sit in top spot on the Intrust Super Cup ladder after a dominant 62-12 win over the Tweed Heads Seagulls in Hughenden this afternoon.

There were 14 tries scored in front of more than 800 thankful locals there to witness the first Intrust Super Cup match played in “Dinosaur Country”.

Townsville didn’t waste any time in the ‘Get in the Game’ Country Week clash with Krys Freeman crossing in the second minute; while Jaelen Feeney was next to score in the following set, and he bagged another try 10 minutes later as his side raced to an extraordinary lead.

After 22 minutes, the Blackhawks were up 28-0 and showed no signs of slowing down.

Kane Elgey gifted Tweed Heads their first points, but another try to the joint-ladder leaders through Shaun Hudson close to the break left a tough task in the second half for the 11th placed Seagulls, trailing 34-6 at halftime.

As the local Hughenden Hawks juniors cheered on their fellow ‘heroes’, it was a dream start in the second half for prolific try-scorer Jonathon Rueben who crossed in the 43rd minute to claim his first of the day.

The onslaught kept coming as Sione Lousi scored in the 51st minute, followed by former Gull Kalifi Faifai-Loa in the following set to raise the bat for the half century.

With the scoreboard at the Flinders Sports Grounds reading 50-6, the Seagulls’ Talor Walters scored a consolation try in the 63rd minute, but that was basically rubbed out when FaiFai-Loa bagged his second four-pointer three minutes later.

The Mendi Blackhawks finished their 62-12 masterclass with a try to Andrew Davey in the 71st minute and the second of Rueben’s two-try haul in the 74th minute.

The result is Townsville’s biggest win of the season and their second this year against Tweed Heads, giving coach and older brother Kristian Woolf the bragging rights over his younger brother Ben.

Speaking post-match, the Mendi Blackhawks coach was wary of his team not getting complacent after the result.

“The win was a bit of a confidence-booster obviously when you score that many points,” Woolf said.

“But we definitely can’t get too excited or ahead of ourselves as Tweed were a little undermanned today.”

The victory also saw the men in green move to top spot on the ladder, but it’s a tough road to the finals as they face four Top 6 teams in their final five matches of the season, starting with Souths Logan next Saturday at Davies Park.

“Our final matches [of the regular season] are really going to benefit us to be honest,” Woolf added.

For Tweed Heads, they remain 11th and face the Cutters at Piggabeen on Sunday.

While it was important to get the win; Woolf also spoke about the experience of taking a round to regional and remote areas as part of ‘Get in the Game’ Country Week.

“We’ve really enjoyed Country Week and I think that most teams do,” Woolf said.

“Plus, at this time of the year, it gives you the opportunity to spend some valuable time together as a team that sometimes we aren’t able to do.”