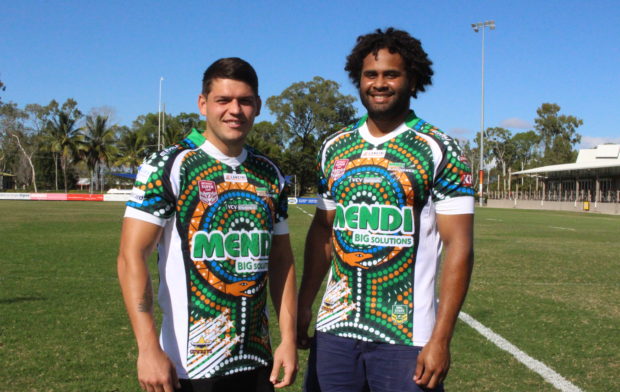 This weekend is the 2018 Intrust Super Cup Indigenous Round.

This gives an opportunity to celebrate, recognise and pay our respects to the traditional owners of the land we live on.

Prior to the game former Mendi Blackhawks player and Captain Anthony Mitchell, whose Indigenous Heritage is the Wakka Wakk and Duramble Tribes, will give an Acknowledgement to Country.

Coach of the Mendi Blackhawks, Kristian Woolf said his team is looking forward to the round.

“Celebrating and recognising Indigenous Round is something we are all very proud to do, and look forward to each year,” Coach Kristian Woolf said.

“Townsville and the Mendi Blackhawks have a long list of successful Indigenous Rugby League players, and we want this to continue and build.”

Temone Power, from the Jangga and Juru Tribes in North Queensland, believes celebrating Indigenous Round is very important for the entire community.

“Having the opportunity to represent my heritage is a great honour and something I look forward to, and all the boys look do,” Power said.

“We all feel honoured and proud to represent not only the Mendi Blackhawks, but our culture and custodian owners of the land that we live and play on,”

“I think it’s good that the Intrust Super Cup gives us this opportunity.”

The team will be wearing specially designed jerseys for the round designed by the Bindal and Wulgurukaba People.

“When we put on the Indigenous Jerseys it makes me feel very privileged and fortunate to be able to represent my people.”

The Mendi Blackhawks kick off tomorrow at 5pm at Jack Manski Oval.  Prior to the game the Under 20’s kick off at 3.20pm.