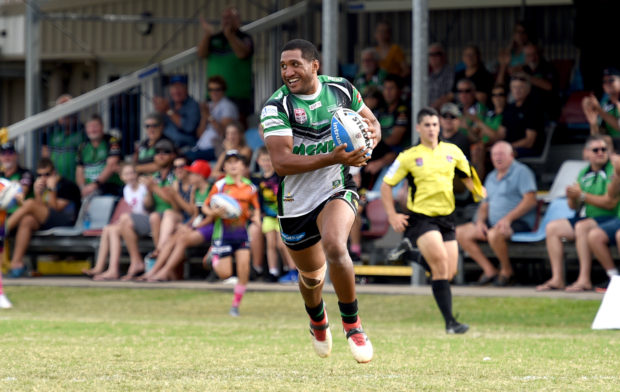 On the same day he was announced in the XXXX Residents squad, flyer Kalifa Faifai-Loa came back to haunt his former Mackay team, scoring two decisive tries in a 28-22 win by Townsville.

Faifai-Loa, who notched a game-clinching last-minute try in Mackay’s 2013 grand final victory, was in the spotlight again as he crossed for Townsville in the 73rd minute at Jack Manski Oval.

His second four-pointer completed a distinct turnaround on the 22-12 advantage Mackay held with half-an-hour left to play.

It also capped a big day for the rugby league journeyman, who has enjoyed two stints with St George Illawarra, time with the Gold Coast Titans, and is now back in Townsville after earlier playing for the Cowboys in 2011-13.

A former Test winger for New Zealand, Faifai-Loa was announced on Saturday lunchtime as a winger for next Sunday’s Residents showdown against New South Wales, a curtain-raiser to Origin II at ANZ Stadium.

Earlier in the week there was speculation that Australian international and Queensland Origin player Justin O’Neill would also pull on the Blackhawks jersey, but that did not eventuate.

If he had of appeared, O’Neill would have been another ex-Cutter suiting up against Mackay.

Currently anchored in last place on the Intrust Super Cup ladder, the Cutters were the stronger team through the first 50 minutes in Townsville.

They scored first via prop Jordan Grant in just the third minute, then responded to back-to-back tries by Townsville’s Krys Freeman and Faifai-Loa with another four-pointer to centre Jack Joass.

Immediately following halftime, the Cutters went on the front foot with tries to Johnny Faletagoa’i and Blake Atherton, pushing them 10 points in front and seemingly destined for an upset.

Yet the ability to defend again came back to hurt Mackay, who have now conceded an average of exactly 30 points per game for the worst defensive record in the competition, despite attacking figures that are on par with many other sides.

Losing 10-year NRL veteran and fullback Lachlan Coote to the sin bin in the 67th minute certainly didn’t help matters, providing the Blackhawks with an extra man for their final try of the game.

Faifai-Loa has now scored in his last five games for the Blackhawks and is a contender for leading try-scorer in the competition with 10 tries, three behind Wynnum Manly’s irrepressible Daniel Ogden.

Both Townsville and Mackay have next week off due to the representative round.