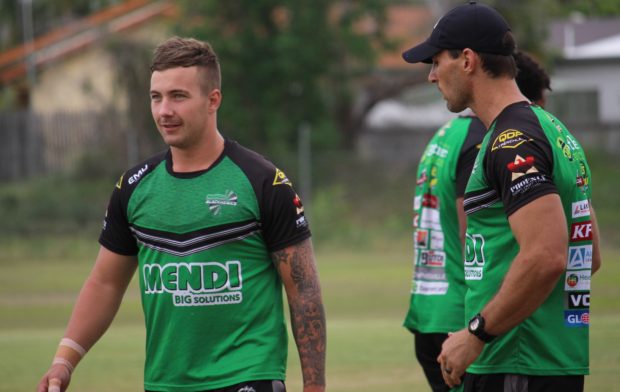 IT’S a luxury Townsville Mendi Blackhawks coach Kristian Woolf isn’t used to — a halves combination to count upon all season.

But the prospect of launching a title assault with Jaelen Feeney and Zach Dockar-Clay as regular playmakers showed how dangerous it could be in Saturday’s 40-8 trial win over Central Capras in Mackay.

The Mendi Blackhawks dominated last year’s wooden spooners 40-8 after leading 36-0 at halftime in the Queensland Cup pre-season hitout, and Woolf was impressed with how the duo combined in their first hitout together.

In previous seasons the team has had to adjust to fringe Cowboys coming in and out of the playmaking spots.

“They both organise pretty well and run pretty well, I thought they complemented each other,” Woolf said.

“They both had periods where they were on the ball a bit more and were dominant in what they were doing, and they supported each other well too.

“It’s a combination we’ve got the luxury of having since I’ve been around at the club. We’ve got two halves we can develop and play with that are there every week.”

He believes the Blackhawks can unleash a more attacking brand of football with noted offloaders coming into the squad.

“They did a really good job, the nine, six, seven and one, it looked like everyone knew what they wanted,” Woolf said.

“What we had as a point of difference from last year was (props) Rod Griffin and Brendan Santi, and outside backs like Kalifa Faifai Loa have great second phase ability.

“We’ve certainly got the potential to play a bit of footy and use the ball more than what we probably have previously, but you have to have the discipline to pull it off.

“We had a real priority around our defence and I thought for the most part, other than a ten minute period where we made a number of errors, we didn’t look like getting scored on.”

The Mendi Blackhawks will host Northern Pride in their second trial at Jack Manski Oval on Saturday night.