Hunters Not Coming to Jack Manski 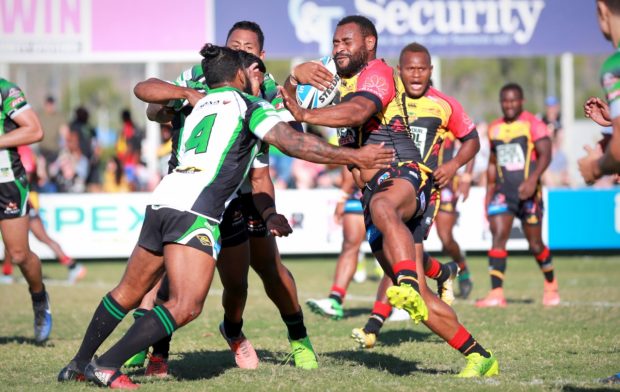 PUBLISHED IN THE TOWNSVILLE BULLETIN

THE Townsville Blackhawks will miss out hosting Queensland Cup premiers the PNG Hunters for the first time.

The Q Cup released its 2018 draw today, and in a significant blow to local league fans the Hunters will not be visiting Jack Manski Oval in what had become an annual footy showpiece.

The Blackhawks will play the Hunters once, with the clash taking place at Port Moresby’s National Football Stadium in Round 12.

Blackhawks operations manager Adrian Thomson said the club was reasonably happy with the draw, which sees the Blackhawks playing four of their first six games way from home.

Blackhawks fans will have to wait until Round 3 (Saturday, March 24) to see the Blackhawks play at home when they host the Northern Pride.

They Blackhawks also have a tough run home, with five of their final six games being played away, including their final two against Burleigh and Wynnum-Manly respectively.

“It’s structured so that we’re away a fair bit early, and we’re definitely away a lot late in the season, but we have a lot of home games through the middle part of the year,” Thomson said.

“We’re happy that the QRL have given us requests; we always request our home game around the ANZAC DAY weekend, and they’ve met that, and we also requested to have a home game on May 5-6 which coincides with the state under-15 carnival here at Jack Manski Oval.

“But we need to set ourselves up early (in the season), like most clubs, and having one home game in the last six rounds is going to be difficult, but we have to play them.”

The Blackhawks kick off the season with a North Queensland derby against the Mackay Cutters in Mackay on Saturday, March 10, and play their first TV game against keen rivals the Ipswich Jets in Round 2 the following Saturday at midday.

Their first home clash at Jack Manski Oval is against the Northern Pride, who may play Todd Carney if the former NRL star does not receive a first-grade lifeline.

But of all the drawcards the Blackhawks have brought to Jack Manski in recent seasons, including the Redcliffe Dolphins and Jets, none surpass the Hunters in terms of crowd numbers and theatre.

“The Hunters draw the biggest crowds at all the (Q Cup) clubs, and just the atmosphere they create is fantastic,” Thomson said.

‘From a footy side of things, playing them once is probably good.

‘But from a crowd perspective … it’s a little disappointing they won’t be coming here.

‘But look, it’s the way the competition is structured.

The Q Cup’s Country Week will be played in Round 19, with the Blackhawks to play Tweed Heads at a yet to be announced regional venue.