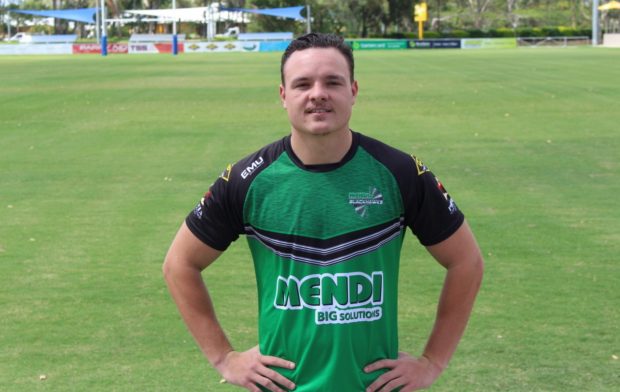 Feeney, 23, comes to the Blackhawks having played 13 NRL games for Newcastle across two seasons, with his last coming in Round 17 this year against the Wests Tigers.

Able to play at fullback and well as No. 7, Feeney will begin pre-season training with the Blackhawks next week.

His signing comes after the Blackhawks yesterday announced the recruitment of former Dragons players Kalifa Faifai Loa and Levi Dodd.

“We’ve been on the lookout for a player to replace MPW and Jaelen is a player who can play at fullback as well,” Townsville Blackhawks operations manager Adrian Thomson said.

“He has similar traits to Michael and he has a big frame like him as well.

“Just as important is the fact Jaelen’s a young guy who is hungry.

“We were negotiating with him for a while but Jaelen was hoping for a chance with a NRL club.

“That didn’t come to fruition, but he comes here with a chance to push his case for NRL and showcase his wares.”

Feeney was part of a growing list of NRL players to part company with the Knights, who have also farewelled the likes of Pauli Pauli and Josh Starling.

“At the end of the day I think I’ve still got a bit to offer,” Feeney told the Newcastle Herald recently.

“I can play a fair few positions and I’ve done everything the club could have asked of me during some tough times.

“Hopefully people see that as a good thing and it helps me get another gig at a good, strong club with a good system.”

Thomson said the Blackhawks were confident Feeney would be a perfect fit for their on-field and off-field culture.

“He definitely is a quality player and he’s originally from the Gold Coast, where (former Blackhawks fullback) Jahrome Hughes is from,” Thomson said.

“He’s good mates with Jahrome and also with Shaun Hudson who is over at the Cowboys.”

Cowboys contracted playmaker Kyle Laybutt, who played all but two of his club games with the Blackhawks this year, will again be available for the Blackhawks next season.

But Thomson said the Blackhawks were still searching for another half.

“We’re still chasing another one, just so that if players get called up to NRL we remain self-sufficient,” he said.

“But the market for quality halves is very competitive.

“We’re trying to put together a team that will compete for the whole season.

“A lot of (Queensland Cup) clubs are recruiting good players, so it’s going to be pretty strong competition next year.”