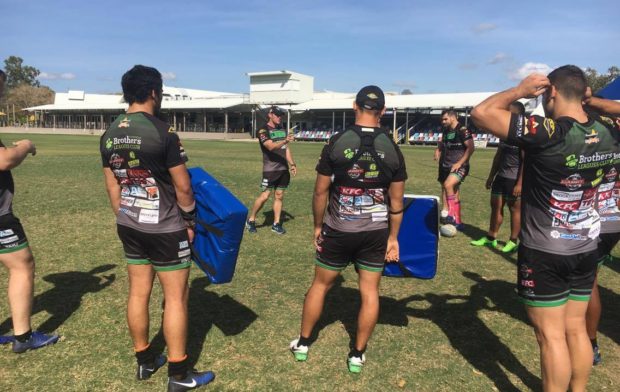 It’s all systems go for the Townsville and Districts Mendi Blackhawks as they head to Suzuki Stadium tomorrow in a knockout semi-final against the Easts Tigers.

Coach Kristian Woolf said his team has been preparing well all week.

“This is the best time of the year to be playing footy,” Woolf said.

“You can already feel a bit of extra excitement in the players, which is what you want heading in to a game like this.”

“The Tigers have been a good, consistent team all year.”

“They have a powerful pack, which we are going to have to match in the middle, as well their two halves are a real danger.”

“We are going to have to be at our very best for the full 80 minutes,”

“And we have been giving ourselves every opportunity at training this week to do this.”

The game will have extra motivation for Anthony Mitchell and Michael Parker-Walshe, hoping to not be their last in the black and green.

Daniel Beasley unfortunately remains in doubt for possibly his last game as well, before heading to France in October.

Star fullback Carlin Anderson will also be watching from the sidelines after surgery on his forearm in Brisbane on Thursday.

The game will be live streamed on the QRL website from 2pm this Saturday.