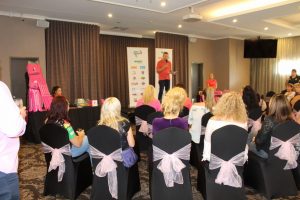 Prior to kick off on Sunday, the Mendi Blackhawks hosted a Women In League function at Brothers Leagues Club, Townsville.

The day celebrated Women in League and was a way to say thank you to all the wonderful ladies in Rugby League in our area.

All proceeds from the day went to the McGrath Foundation, with Tracy Bevan as special guest as well as local politicians and players from the Mendi Blackhawks and North Queensland Toyota Cowboys.

After the function, a “Pink” marquee was set up to watch the U15 girls play from Kirwan, Thuringowa and Bowen State High Schools.

The day finished with the Intrust Super Cup game between the Mendi Blackhawks and Redcliffe Dolphins, with the home team taking the win 26-16.

On behalf of the Mendi Blackhawks, we would like to thank everyone who attended and made the day it a great success!