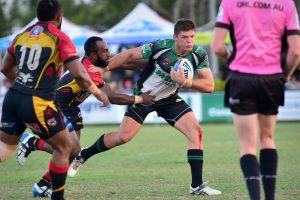 THE Townsville Blackhawks will travel into the jaws of a furnace this weekend, arguably the toughest any travelling team can experience in the Queensland Cup.

But Woolf is sticking by his players, naming the same team that salvaged a 26-all draw against the CQ Capras last weekend after giving up a 20-6 second half lead.

The Cowboys have the bye but Woolf is expecting no further Cowboys allocations, including Ray Thompson who is set have a weekend’s rest after managing a troublesome knee in recent weeks.

Townsville has never won in PNG despite getting close, losing 28-26 in 2015 before suffering a 11-10 defeat last year.

“I’m sure it’s going to be another tight, tough game,” Woolf said.

“But I’d like to think our blokes will really stand up for themselves after a couple of sub-par performances and make a statement.

“I’ve got every confidence that at our best we can be competitive against them.”

The Blackhawks remain sixth on the Q Cup ladder after last weekend’s draw, and the Hunters are on top after thumping the Ipswich Jets 32-12.

PNG have lost just once at home this season, going down to Norths 32-18, and their scalps include Redcliffe and Easts Tigers.

Last weekend they beat Ipswich at their own razzle dazzle game, but it’s without doubt in the physical battle where PNG hurt teams most.

“One thing you know about them is that they’re very physical and they threaten on every play,” Woolf said.

“You need to be in every play mentally.

“But in saying that we’ll be focusing on ourselves this week and concentrating on what we need to do.”

Completion rates will certainly be one area, with the Blackhawks completing just 22 from 35 sets last weekend, while unforced errors were also an issue after making 15.

The Capras were a danger team for the Blackhawks, but the Hunters will undoubtedly present a tougher challenge despite the Blackhawks’ surprising away record of four wins from five games.

Not only that but Blackhawks winger Jonathon Reuben is by far away the Q Cup’s tryscorer with 16, almost double that of his nearest rivals.

“He’s a bloke that can sniff out a try with half an opportunity,” Woolf said.

“It’s a really good attribute and we have a few blokes who are like that … but we need to get all our game together.

“We’re very good at finding a try here and there, but we’re just not following that up with the pressure that’s needed afterwards and making the most of a try.”