Switching to a New Light at Jack Manski Oval 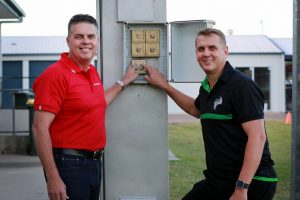 Things will appear much brighter at Jack Manski Oval thanks to a State Government “Get Playing Places and Spaces” Grant allowing them to upgrade the field playing lights.

Previously the lights were at 90 lux in the middle of the field making them only just suitable for local games.

Now shining bright at a constant 227 lux across the entire field, Jack Manski Oval is ready to host its first Intrust Super Cup night match, later in the year.

The lights were tested on Friday night when Brothers hosted the Burdekin Rosters and Brothers Leagues Club and Mendi Blackhawks CEO Justin Wilkins said he couldn’t be happier.

“Compared to what they lights were previously, it felt like the boys were playing in daylight,” Wilkins said.

“Aaron Harper and the State Government have done a terrific job and we would like to thank them for seeing our project as a worthy beneficiary.”

“We sent our application off in September last year and got approval in December, so things have moved quite fast for us.”

Wilkins said he was confident the new lights will attract more games to Townsville.

“We are hoping that this will bring other State Level and Junior State and National tournaments to Townsville,”

“It’s exciting for the whole community.”