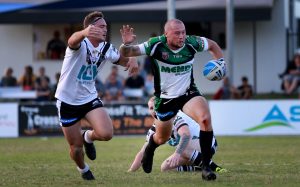 Michael Parker-Walshed in his 50th game for the Mendi Blackhawks. Photo: Alix Sweeney

The Townsville Mendi Blackhawks will go back to the drawing board after a 22-6 point loss to the Souths Logan Magpies at Jack Manski Oval on Saturday.

The visitors were first to score after a grubber kick from Michael Parker-Walshe was scooped up for an almost full length try in the 5th minute.

Jonathan Reuben was next to score off a loose ball, sprinting his way to the try line in the 13th minute, making this the only try for the home team on the day.

Carlin Anderson kicked the conversion notching up his 100 points in the Intrust Super Cup for the year so far and remaining on top of the points scorers leader board.

The Souths Magpies struck back once more in the first half and two tries in the second half including a late try in the 74th minutes, sealing the win for the visitors.

The game also marked 50 games in the black and green for Michael Parker-Walshe.

Focus for the Mendi Blackhawks will turn to Sundays game against the Central Capras at Jack Manski Oval. The game will be televised live on Channel 9.

See the full gallery below.