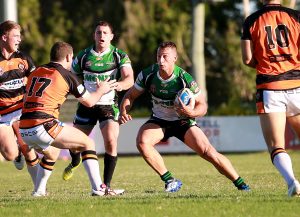 The Townsville Mendi Blackhawks went down to the Easts Tigers 35-22 in a sea soaring encounter at Jack Manski Oval on Saturday afternoon.

The Mendi Blackhawks led 18-10 going into the sheds at half time despite giving up an early lead to the Tigers who were first to put points on the board.

The Tigers were again first on the board in the 2nd half before Jonathan Reuben scored his 3rd try of the day, giving the Blackhawks a 22-16 lead.

Shortly after, the Tigers responded with another converted try to even up the scores and setting up for a grand stand finish.

Scores were locked together until the 73rd minute before the Tigers landed a field goal.

Two late tries by the Tigers, including 1 just after the full time siren, broke the hearts of the Mendi Blackhawks strong home crowd in attendance.

Coach Kristian Woolf said a lack of ball control and composure saw his team put in an uncharacteristic display of errors.

“Unfortunately we are not going quite well enough to win games against real quality opposition,” Woolf said.

“Our completion rate was really poor and that put too much pressure on ourselves, especially in the second half.”

“Coming off 2 losses in a row I’m hoping that we can improve this weekend against the Pride.”

All three Townsville Mendi Blackhawks will travel north to Cairns this weekend for the local derby clash, and points towards the Foley Shield.

The Townsville Mendi Under 18’s put in a solid effort defeating the Easts Tigers 24-16.

A try in the 68th minutes to the Mendi Blackhawks gave them a 30-24 win over the Easts Tigers with Oscar Carter on fire with the boot kicking 5 from 5 conversions.

See our gallery below