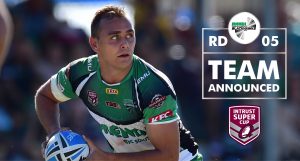 Townsville Mendi Blackhawks Coach Kristian Woolf has named his team for Round 5 to take on the Easts Tigers at Jack Manski Oval, in the Intrust Super Coach.

A win tomorrow will see them remain on top of the ladder after 5 rounds.

Corey Jensen makes his welcome return to the team after a week on the sideline due to suspension.

“Corey has been outstanding for us in every game this year,” Woolf said.

“He brings to the team experience and size, and that’s what we will need against the Easts Tigers.”

Woolf said he is expecting his team to be back to their best this week.

At the time of Zaidee’s death, the Turner family had been registered organ and tissue donors for five years. As a result, Zaidee donated her organs and tissues at the Royal Children’s Hospital, as were her wishes at the time.

From this gift, the lives of seven people were improved and, in some cases, saved. The shoelaces will be on sale for $2.00 per pair during the day at Jack Manski Oval.

The first game of the afternoon sees the Mendi Blackhawks U18 Mal Meninga Cup team kick off at 12.25pm followed by the U20 FOGS State-Wide Comp at 2pm.

The Intrust Super Cup game kicks off at 4pm.