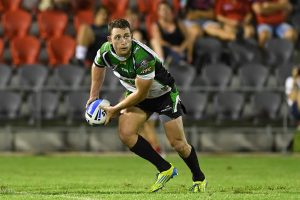 The Townsville Mendi Blackhawks have recorded their first loss of the 2017 Intrust Super Cup season, going down to the Redcliffe Dolphins 18-6.

There was plenty of interest in the game even before kick off, with Benji Marshall starting for the Dolphins, he didn’t disappoint either, setting up 2 of the Dolphins 3 tries.

Coach Kristian Woolf said that early errors put his team under pressure for the remainder of the game.

“You have to be at your best when you are playing a team like the Redcliffe Dolphins,” Woolf said.

“Our attack execution, when we got the opportunity, certainly wasn’t where it has been in the last few weeks,”

“We will have to work on these things before we face the Easts Tigers this weekend.”

In the Under 18 Mal Meninga Cup, the Townsville Mendi Blackhawks recorded their first win of the year, defeating the Redcliffe Dolphins 28-16.

The FOGS Under 20 State Wide competition saw the Dolphins keep their perfect record intact, with a 20-16 win over the Mendi Blackhawks 20-16.

The next games for the Mendi Blackhawks are home games against the Easts Tigers this Saturday.