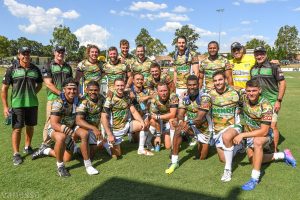 The Blackhawks celebrating after their win over the Jets on Sunday.  Photo courtesy of Vanessa Hafner

THE Townsville Blackhawks have set the Intrust Super Cup benchmark with a classy yet hard-fought 39-26 win over grand final nemesis the Ipswich Jets.

Former Gold Coast Suns and Penrith Panthers player Josh Hall scored two tries for the Blackhawks in his ISC debut after being a late inclusion, and former Jets fullback Carlin Anderson weathered a barrage of sledging to make some dynamic plays.

Both teams chanced their arm in the ISC’s best game of the season to date, but the Blackhawks win was built on the strength of its upfront performance.

Hoare is likely to have concussion tests during the week, however, after copping a heavy second-half knock, as will Hall who was taken off field late in the game.

Man of the match Blake Leary and fellow second rower Andrew Niemoeller were singled out for praise by Blackhawks coach Kristian Woolf following yesterday’s win, which keeps the Blackhawks unbeaten after two rounds.

“Blake and Andrew were outstanding; it would be hard to split them for best man on field,” Woolf said.

“Our forwards did a tremendous job to make good inroads up the middle.

“We defended well and we did good things in attack as well, and yes conceding 26 points is a lot, but the Jets are a team that throws caution to the wind and when it comes off they’re very dangerous.”

The Blackhawks soon made it 10-0 when Hall scored his first after getting the ball out wide thanks to quick hands from Moseley and Carruci.

Ipswich hit back with tries from winger Michael Purcell and Richard Pandia to make it 12-10, but that was the last time Ipswich would hold the lead as Anderson capped his triumphant return to Ipswich with a runaway try off a Michael Parker-Walshe chip kick.

Parker-Walshe scored himself with another runaway four-pointer before halftime after collecting an intercept near halfway, and Jonathan Reuben was the beneficiary of a bust by Leary after halftime to score under the posts.

Ipswich’s Mikaere Beattie got the home side back in the fight with a powering try five minutes later, but Hall’s second try appeared to put the result beyond doubt, only for Ipswich to surge back again when Purcell got another for the Jets to make it 32-24.

But Beasley’s try snuffed out the home side’s comeback, and a well struck Parker-Walshe field goal put the result beyond doubt.