The Townsville Mendi Blackhawks were thrilled to host Australian Boxing Champion, Jeff Horn, today ahead of his World Title Fight in April.

Players and staff got to mingle with the champion over a relaxed lunch and Horn was only too happy to offer some advice for the boys ahead of the regular season.

“He gave us a few tips, one was on how to get our body weight correct before a game,” Mendi Blackhawks front row Lee Jewitt said.

Jewitt said it was an honour to meet him. 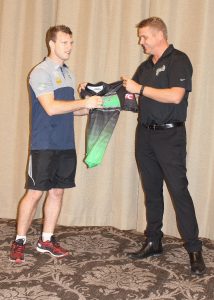 “Coming from being a school teacher and now fighting for a World Title against Manny Pacquiao, is absolutely phenomenal.”

Horn said he was still unsure on the location of the fight, but one thing is for sure, we will all be cheering for him.