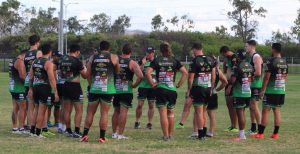 With the pre-season trial games just announced, the competition for spots at the Townsville Mendi Blackhawks has started to heat up.

Under the watchful eye of Head Coach Kristian Woolf and new Strength and Conditioning coach James Moran, the players have taken training up a level as they strive to bring the best out in each other.

The first trial match announced for the Mendi Blackhawks U18 and 20’s will be in Mackay on February 4, followed by all 3 grades against the Northern Pride in Cairns, February 11.

The third and final trial game will be against a Cowboys composite side on February 17, at Jack Manski Oval.

The Blackhawks 18’s and 20’s will play matches in Ayr against the Burdekin Roosters the following day.

Woolf said he couldn’t be happier with how the players have presented themselves following their time off, and indicated the initial signs were positive for another successful season.

“It’s only early days but I couldn’t be happier with how they are applying themselves”, Woolf said.

“Obviously nobody has played a game yet, but if you look at all the key indicators, this group is giving itself every opportunity to be successful”.

The first trial game is less than 3 weeks away, and if you are feeling footy starved like the rest of us, join us for the first taste of QRL action in Mackay.