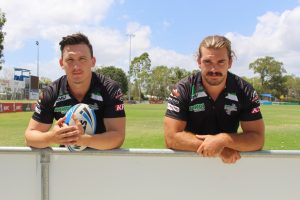 Three local players have been rewarded by the Townsville & Districts Mendi Blackhawks after their outstanding performances in the 2016 season.

Townsville District Rugby League (TDRL) players Cade Maloney, 21, Halvor Harris, 22, and Matt Laumea, 24, have been given the opportunity to complete preseason training with the Blackhawks squad, with the chance of picking up a contract in 2017.

Blackhawks coach Kristian Woolf said he was impressed with the way Harris lead for Centrals ASA Tigers in 2016.

“Halvor Harris was certainly a stand out for Centrals,” Woolf said.

“He plays tough and works very hard and he’s got a lot of attributes that I think will serve very well in terms of helping play at a high level.”

Woolf spoke equally highly of Maloney, who received the TDRL Best Forward award for the 2016 season.

“Cade is a little bit different to every other forward in the competition, he’s very athletic, he’s a little bit dynamic in terms of how he plays,” Woolf said.

“For a guy with some size behind him he’s got good speed and good footwork so it certainly gives him a lot of attributes that, again, I think can help him play at a higher level.”

Laumea was offered a second train and trial with the Blackhawks after an impressive season in 2016.

Pictured: Matt Laumea on a train and trial for the Blackhawks last season

“Matt trialled and trained with us last season and we have brought him back again,” Woolf said.

“I think he has developed into a really good player.

“This year he was a standout player for Brothers which showed us that he continually wants to develop and improve his game.”

Woolf said that it shows TDRL players they will be recognised if they are performing at a local league level, and that the three were well deserving of the opportunity.

“We’d certainly like to see them playing for us and that’s what we’re about in terms of offering opportunities to blokes who are in our local competition,” Woolf said.

“We haven’t gone to other competitions to offer our train and trials, we want to get it out of our competition.

“We think we’ve got the talent and we’ve got guys like these guys that also have the work ethic to back that up and really make a go of it.”

Woolf said the local competition will also benefit from players training with the Blackhawks for preseason and going back to their clubs bigger and fitter for 2017.

“We’ll have some really good players that are contracted in our squad that play in the local competition at times and that’s all going to help the competition be a lot stronger and a lot better quality.”

Maloney said the opportunity to train and trial with the Blackhawks was a good reward for his hard work throughout the season.

“You really don’t expect rewards and to get something like this, it means it’s all paying off for you,” Maloney said.

Harris said that the opportunity meant a lot to him and that it was good to get recognition from the Blackhawks.

“It’s good for the local players as well just to see that it’s possible and if they dig in it can happen,” Harris said.