Carlin Anderson is feeling right at home in Townsville

A player who was public enemy number one for the Townsville and Districts Mendi Blackhawks in their 2015 Intrust Super Cup Grand Final loss will pull on the black and green jersey in 2017.

Try scoring sensation Carlin Anderson, who played a considerable part in the Ipswich Jets’ run to securing the Intrust Super Cup and State Championship in 2015, will take his place in the 2017 Mendi Blackhawks line up after agreeing to a one-year deal.
Anderson spoke of his respect for the Mendi Blackhawks structured environment after coming from the razzle dazzle of the Ipswich Jets, “It’s what I needed I think to be honest. Coming from an unstructured team to a structured team is really going to improve my footy.” He said.

“The Blackhawks are a really professional club and having Woolfy as a coach, I know that’s going to help me on and off the field. I feel like being here will help me mature more as a player and as a person.”

Coach Kristian Woolf had equally high praise for the new recruit, “We play a more conventional structure than the Jets where he has come from and he will have to learn on the run but with his speed and his ability to find the ball he’s going to be a really good acquisition for us.”

A speedy winger or fullback, Anderson will provide a valuable new option in the outside backs for the outgoing Player of the Year Jahrome Hughes. Known for this athleticism, Anderson has represented Queensland in league, union, football and cricket at junior levels.

Fullback is a position that Anderson is keen to make his own.

“My main goal is to hopefully start in the number 1 jersey and play consistent footy throughout the year and maybe win a premiership with the Blackhawks.”

“But that’s a way off. The one thing I am focused on right now is being in that number 1 jersey by the end of pre-season.” He said.

Whilst the fullback role is integral to the team’s success Coach Kristian Woolf said there was no pressure on the young outside back to emulate his predecessor, “I don’t want him worrying about filling Jahrome’s shoes. I want him to be Carlin Anderson.” 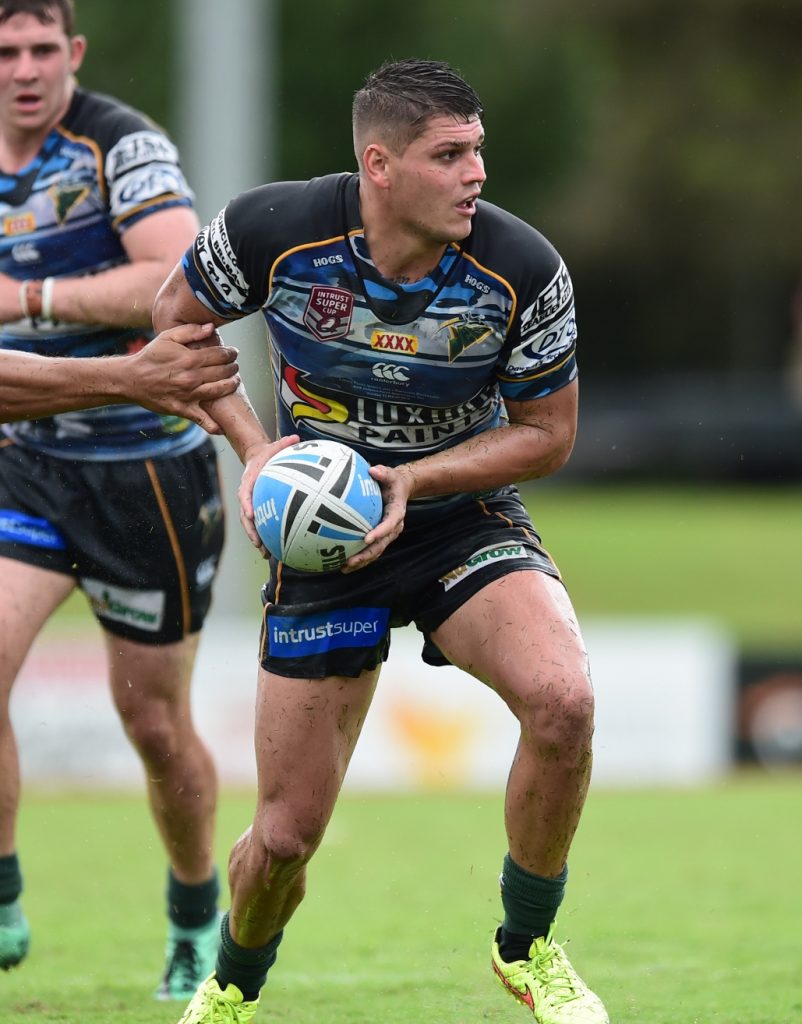 Anderson in action for the Ipswich Jets

“He’s made a huge impact on the competition as a very young bloke. He’s only just turned 21 and he’s shown that he knows how to be a real key player in a team that wins premierships. It was only 12 months ago when we were on the losing end against him.”

Woolf spoke of the attributes that drew the club to sign Anderson, “It’s a very exciting signing for us as a club. Carlin has a real X-Factor about him.”

“He’s a genuine athlete and he has that thing you can’t coach in his speed. He has a real knack for turning up on the ball and finding points.”

After a horror year with the Brisbane Broncos during which time he broke his jaw twice, the 21-year-old is excited for a new opportunity in North Queensland. The Ipswich Grammar graduate had to earn his confidence back after the insertion of three metal plates and ten screws to repair his jaw.

Playing in a recent Koori Carnival helped Anderson to come to terms with the plates and screws and feel comfortable making runs and taking tackles again.

“My jaw felt good. I felt confident to take the hits and I ran pretty freely.” He said.

“Speaking with the Blackhawks has given me a real boost in that I know if I perform well I am a chance of cracking the NRL again.”

“They seem to have an outstanding system up here for players to develop and step up to that next level. I’m keen to rip in and repay the faith they had in signing me.”

The young indigenous talent has speed to burn and footwork to match. A year in the NRL system under Wayne Bennett, albeit an interrupted one, will benefit Anderson greatly as he embarks on a new Intrust Super Cup campaign and looks toward the future.

“I’ve got no doubt that Carlin will fit well into our group. He’s made no secret of the fact that he wants an opportunity to play NRL next door and I think that’s something that we can give him the best pathway into.” Woolf said.

“Carlin is an impressive young bloke. He has confidence in his own ability and a willingness to test himself in a new and different environment. He’s mentioned a number of times that he wants to take the opportunity with both hands.”

“I think we have the environment and he has the ability. It’s up to all of us now to make it work and help him get to that next level.”