The Easts Tigers are a powerhouse club with a prestigious history and many-a-great has called Langlands Park home.

The secret weapon currently orchestrating plays for the Tigers comes from some prestigious pedigree himself, Five-Eighth Billy Walters is the son of the Queensland Maroons coach, Kevin.

The young half has had a wonderful resurgence after fracturing his leg at the beginning of the year and will surely be a major factor in the visitor’s attack come Sunday.

Pairing with Walters in the halves will be young Melbourne Storm talent Brodie Croft who made headlines earlier this year with a classy NRL debut for the Storm in round 15 against the Dragons.

Alongside the talented halves pairing, the Tigers have a large, mobile pack and some speedy outside backs that the Townsville & Districts Mendi Blackhawks will be required to manage if they are to be victorious in the elimination final at Jack Manski Oval this weekend.

Mendi Blackhawks Coach Kristian Woolf has included the three Townsville players who were last night named in the Intrust Super Cup Team of the Year in his side. Jahrome Hughes (Fullback), Moses Pangai (Centre) and Rhyse Martin (Back Row) will take to the field alongside People’s Choice nominee and Captain Anthony Mitchell and the competition’s Leading Try-Scorer Jonathon Reuben.

The two elimination final combatants have only met once in 2016 when the Tigers came away with a hard fought 29-20 victory in Round 12. Woolf is in no doubt that this weekend’s match will be equally challenging.

“Now moving on to this weekend’s final it is obviously a challenge we are really looking forward to.”

“To be in this position of playing semi-finals and to be able to do it at our home ground is what all the hard work throughout the year has been for.”

“We know how tough Easts will be this weekend, but I also know that our blokes are nearing their best and ready for the challenge.”

“We certainly encourage all of our supporters to come down on Sunday and help us get over the line.”

The game will kick off at 1:40pm and will be broadcast on channel 9. Prior to the Intrust Super Cup Elimination Final between the Mendi Blackhawks and the Easts Tigers there will be some Under 9’s action as well as a Women’s Rugby League Match.

Ticket prices are the same as any regular season home game and are available ONLINE, at the gate or at Reception of Brothers Leagues Club. Don’t miss out on being there when the Townsville & Districts Mendi Blackhawks contest the elimination final this Sunday! 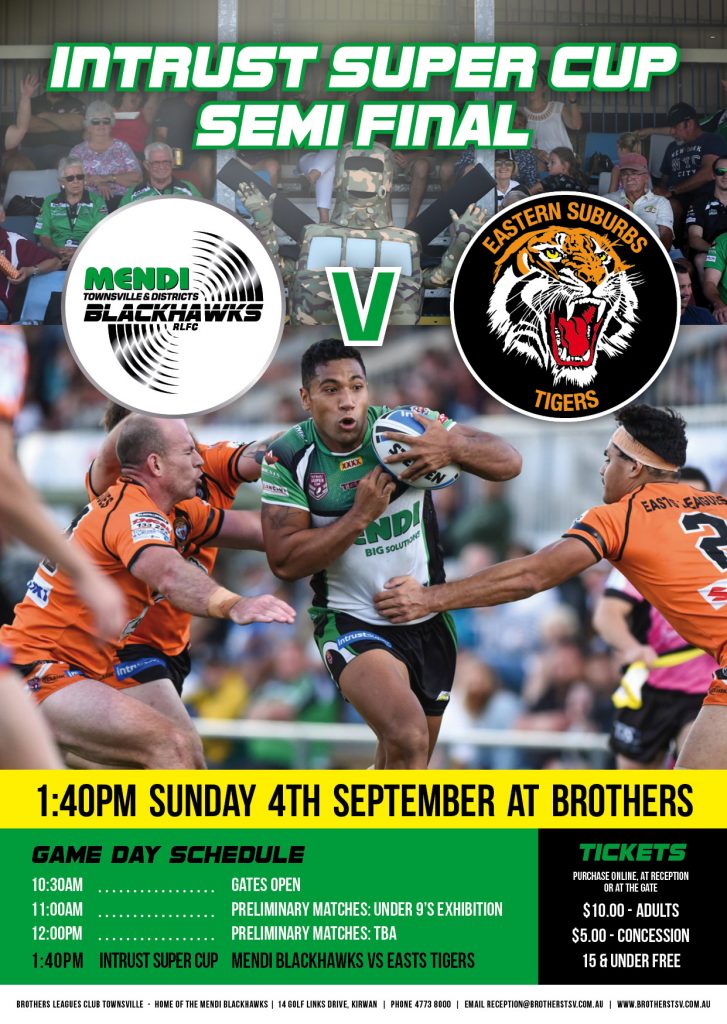