The PNG Hunters are currently in red hot form. Averaging a winning margin of over 13 points from their 14 wins so far in season 2016. The narrowest winning margin so far being the 1-point thriller over the Townsville & Districts Mendi Blackhawks back in round 6.

After the tight loss in PNG the Mendi Blackhawks will be looking for a reversal of fortune this weekend when they face the Hunters on their home turf at Jack Manski Oval on Saturday.

In what will be the final regular season home game for 2016 the Mendi Blackhawks will be looking to take the win and leapfrog the Hunters into third place on the Intrust Super Cup table. Last year’s match against PNG drew the largest ever crowd in the club’s short history.

A huge crowd is expected at Jack Manski Oval as there will not only be a thrilling Intrust Super Cup clash but also plenty of exciting local league action as the Townsville & Districts Rugby League Semi-Finals will provide the curtain raisers for the Mendi Blackhawks.

The home side will settle on their final team following training Friday afternoon as they are wait for players to pass final fitness tests. However, Matthew Bowen will not play due to work commitments. The PNG Hunters have named 20 players with 3 to be omitted prior to kick off.

Local League teams Burdekin Roosters, Brothers, Centrals Tigers, Norths, University and Western Lions will all feature in semi-finals action from Under 18s right through to A Grade. It’s a day of rugby league not to be missed! 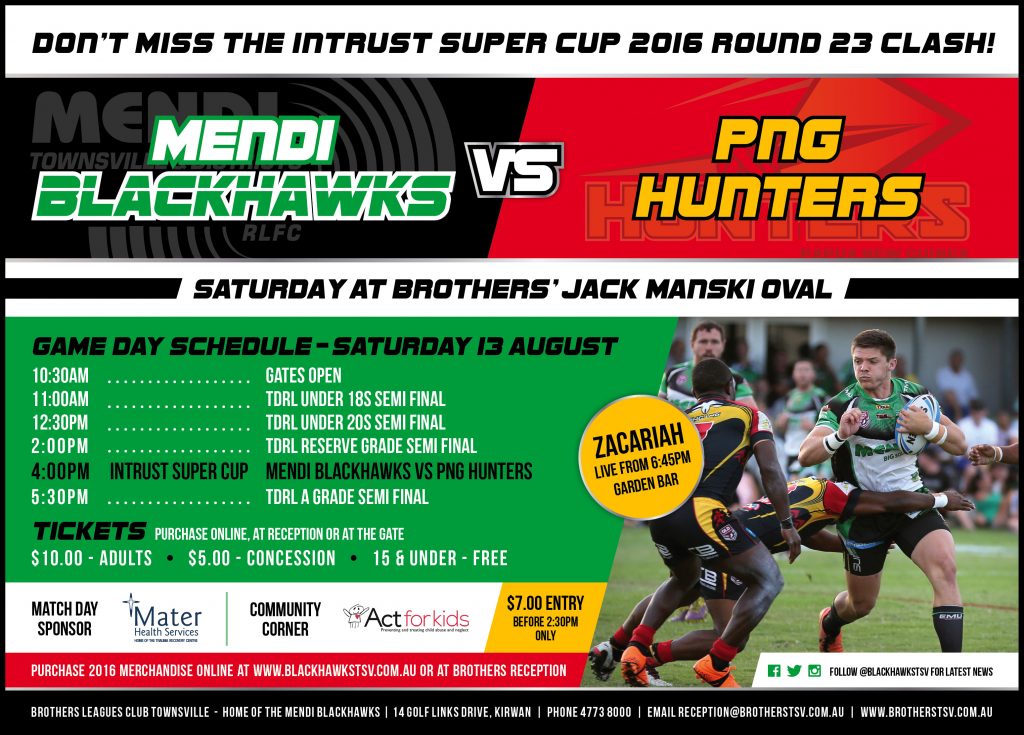