The Burleigh Bears currently sit on top of the Intrust Super Cup ladder for a very good reason. The Bears have some impressive statistics in their favour. Not only are they averaging 30 points per game and sitting on 13 wins, but 60% of their wins so far this season have come by 18 points or more.

But it’s not just stemming the flow of points that the Townsville & Districts Mendi Blackhawks have to worry about in Round 19. The Bears also have plenty of size in their side with Luke Page, Josh Ailaomai and Paterika Vaivai leading the pack. The three weigh in at a combined 344kg and are currently muscling opposition teams left right and centre.

Coming up against the Bears will be a tough ask for a Mendi Blackhawks side who have lost three of their last five matches and have experienced a seriously bad run when it comes to injuries in their forward pack. Glenn Hall being the most recent prop to suffer a season ending injury.

In their second last home game for the season the Mendi Blackhawks will this week welcome back some special talent in Matty Bowen and Jahrome Hughes. Lorenzo Maafu will also return from suspension to add some muscle to the pack which will include in-form Corey Jensen, Brendan Santi, Rhyse Martin and Davin Crampton who will return to his preferred position in the back row.

Coach Kristian Woolf is confident that his troops will be well prepared to match it with the ladder leaders “This week will be a great challenge for our blokes against the current compeititon leaders, and one I know we are all really looking forward to.

“Our last game against Burleigh was a 28 all draw and a very tough, physical encounter. This week will be no different I’m sure.

“The bye came at a great time for us in terms of players being fresh and ready to go and getting people back in their favoured positions which again we are all looking forward to.” he said.

This weekend will also be the Men in League Round of the Intrust Super Cup. The Men of League Foundation plays a vital and growing role in the post playing welfare of our participants and we encourage every player, official, coach or volunteer, whether past or present, to join this very worthwhile cause.

The Mendi Blackhawks will be hosting a Men of League function, wearing special socks and Men of League will also be the Community Corner participant this weekend. Proceedings will kick off with a special exhibition match between the Queensland Outback and NQ United at 2pm with the Intrust Super Cup blockbuster between the Mendi Blackhawks and Burleigh Bears to follow at 4pm. 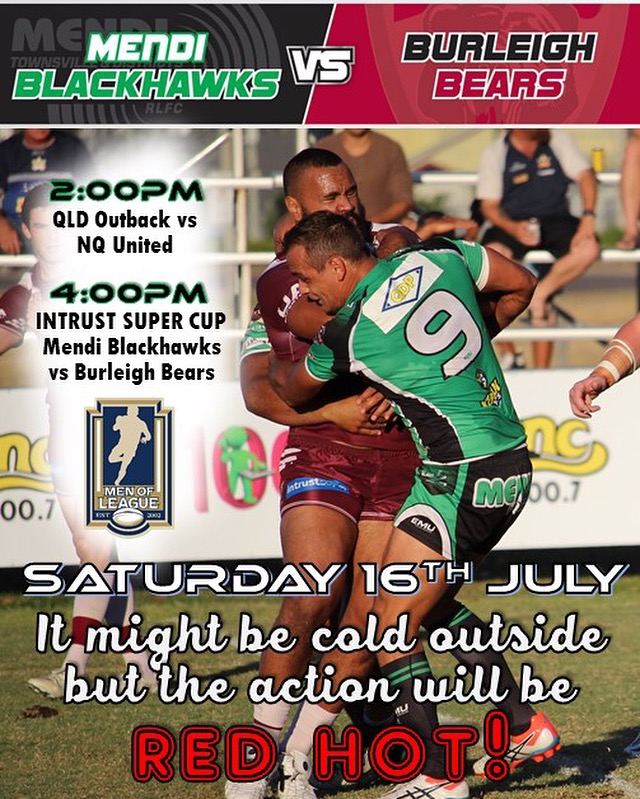