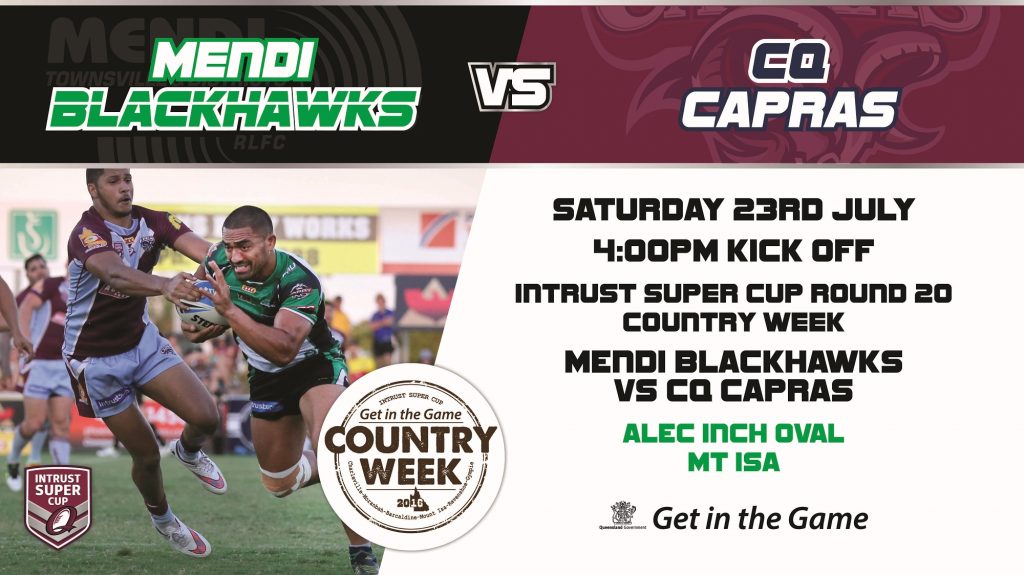 The Townsville & Districts Mendi Blackhawks are preparing to head west next weekend to face the CQ Capras in Mount Isa as a part of ‘Get in the Game’ Country Week 2016.

‘Get in the Game’ Country Week is a joint initiative of the Queensland Government and the Queensland Rugby League to bring Intrust Super Cup matches to regional areas. In past years the concept has provided a great boost for many rural and regional communities and is viewed as one of the highlights of the QRL calendar.

QRL Managing Director Robert Moore notes that Country Week round would not be possible without the Queensland Government’s generous support.

“We can’t thank the Queensland Government enough for its commitment to this important and rewarding program,” Moore said.

“Regional Queensland is the heartland of rugby league. For many years now we’ve seen a string of born and raised country players achieve great things at representative level.

“We’re immensely proud of this and want to see it continue for many years to come. Not only that, we believe the Country Week initiative provides a unique avenue for our regions to showcase their communities to the rest of the state.”

Season 2016 sees them travel to Mount Isa on Friday 22nd July to take part in a plethora of rugby league activities in the lead up to game day on Saturday 23rd July. The players and coaching staff will be involved in school visits, attending junior club training and meet and greets with local fans.

Coached by Mount Isa lad Kristian Woolf and lead by CEO Justin Wilkins who also grew up in Mount Isa and was previously the CEO of the Buff’s Club; the Mendi Blackhawks had an extremely successful inaugural year in the Intrust Super Cup competition. After winning a Minor Premiership in 2015 and going down in the Grand Final, the team will be fired up to finish the 2016 season on a high and are sure to put on an entertaining show.

This year the Mendi Blackhawks will feature some high profile NRL talent including former North Queensland Cowboy cult hero Matty Bowen and former Gold Coast Titan Davin Crampton, who was playing in the Mount Isa local rugby league competition for Normanton at the beginning of 2016.

Bowen has played 3 games so far for the Mendi Blackhawks much to the delight of the crowds in attendance. The man they call Mango still possesses that unique magic that can turn a match and has had a hand in creating many chances for his new side.

Fellow new recruit Crampton has also been in great form. Despite making his debut out of position in the centres the back rower didn’t miss a beat and has impressed with his strong runs, solid defence and game sense.

In the week leading into the game the Mendi Blackhawks will conduct a Junior Development Tour visiting Hughenden, Richmond, Julia Creek, Cloncurry and Mount Isa. Football Operations Manager Adrian Thomson spoke about the importance of supporting those playing and volunteering in rugby league in the North West.

“Get in the Game County Week is a fantastic initiative and it gives our club another opportunity to get out through the Western Corridor to Mount Isa, which we see as part of our footprint.

“We believe it’s incredibly important to work collaboratively with the QRL and NRL to develop rugby league in the North West and this will be our second Junior Development Tour of the of the region.”

There will also be a Referee’s Update organised by Michael Inman. The combined initiative of the QRL, NRL and the Mendi Blackhawks will ensure that regional referees are updated with the appropriate skills and training without having to travel to a capital city to attend an update.

There will also be a Women’s Rugby League match held at Alec Inch Oval at 6pm following the Intrust Super Cup match.

Tickets are on sale for the match now and can be purchased from MacRae News at Turanga Shopping Centre, Mount Isa and Work Pac in Simpson Street, Mount Isa.