Townsville and Districts Mendi Blackhawks opponents for Round 17 the Souths Logan Magpies, have proven to be a difficult team to shake so far in Season 2016 of the Intrust Super Cup.

The Magpies are a combination of experience and exuberance with old heads like Phil Dennis and Andrew Edwards lining up alongside young Broncos Joe Boyce, Herman Ese’ese, Marion Seve and Sam Scarlett. The side’s tenacity have seen them hold on for two draws as well as 6 wins and 7 losses. Placing them 8th on the Intrust Super Cup ladder.

Of the two sides, the Mendi Blackhawks drew first blood this season in Round 3 with a 20 point win over the Magpies at Jack Manski Oval. This will no doubt provide the black and whites with plenty of motivation to turn the tables this weekend at their home ground of Davies Park.

The Mendi Blackhawks have named a similar line up to last weekend and will be waiting to see how some of their players get through training during the week prior to settling on the final line up.

The Townsville boys will be looking to continue the momentum from last week’s grinding win over the Falcons.

“This week gives us a chance to back up a good, tough performance from last weekend, with much of the same against Souths.” Coach Woolf said.

“Souths have been travelling well this year…they have a big forward pack and are always difficult at Davies Park.”

“We are looking forward to a strong performance this week before heading into a hard earned bye.”

The good news for Mendi Blackhawks fans is that the game will be live streamed. You can find the game HERE. 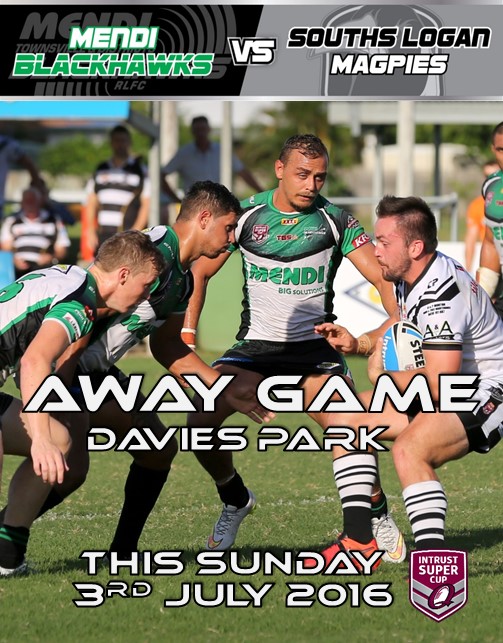