This Sunday the Townsville & Districts Mendi Blackhawks hope to see a sea of Hawaiian shirts and hula skirts as they take to the field to take on the Norths Devils in Round 13 of the Intrust Super Cup.

The Game Day experience will feature a Hawaiian Beach Party theme. All patrons are invited to dress in their very best Hawaiian gear to receive a reduced price entry ticket. Half time entertainment will feature a Hula competition and Coconut throwing keeping in line with the beach party theme.

The club hopes to create a tropical vibe for the Sunday afternoon clash which will also feature local TDRL action between Centrals and Norths.

In the Community Corner this weekend is HeartKids, a registered Health Charity dedicated to providing support to families of children with heart disease, be it congenital (born with) or acquired. The organisations also works tirelessly to raise funds for leading cardiologists and researchers to assist in reducing the incidence of Childhood Heart Disease and to reduce the mortality rates currently being experienced.

Coach Kristian Woolf is yet to finalise his team as the club is still waiting on the fallout from the first match of the 2016 Origin series. Last night’s injury to Michael Morgan is likely to affect the Mendi Blackhawks allocations and may require some reshuffling for the team.

However whilst the final team remains up in the air, there is one person confirmed to play who is sure to catch the attention of the local and greater North Queensland community. The great Matthew Bowen will be making his first home game appearance on Sunday in front of what the club hopes will be a large and vocal home crowd at Jack Manski Oval. The 270 NRL match veteran had a fantastic début for the Mendi Blackhawks last weekend and will no doubt be instrumental once again as they battle the Norths Devils.

The home side will be facing a buoyant opposition in Norths, who last weekend posted a big 8 tries to 3 victory over the Tweed Heads Seagulls following a run of 4 losses in a row.

Norths, who currently have a 4 and 6 win/loss record, experienced success at the beginning of the season and boast 3 Brisbane Broncos in the side named for this weekend’s match at Jack Manski Oval.

“Norths will be coming up here with plenty of confidence off last week’s strong win over Tweed and they present another good challenge for us as a group.

“While happy with parts of our game from last week, we have plenty of things we want to improve on and will be aiming for that to start this weekend.” Coach Kristian Woolf said. 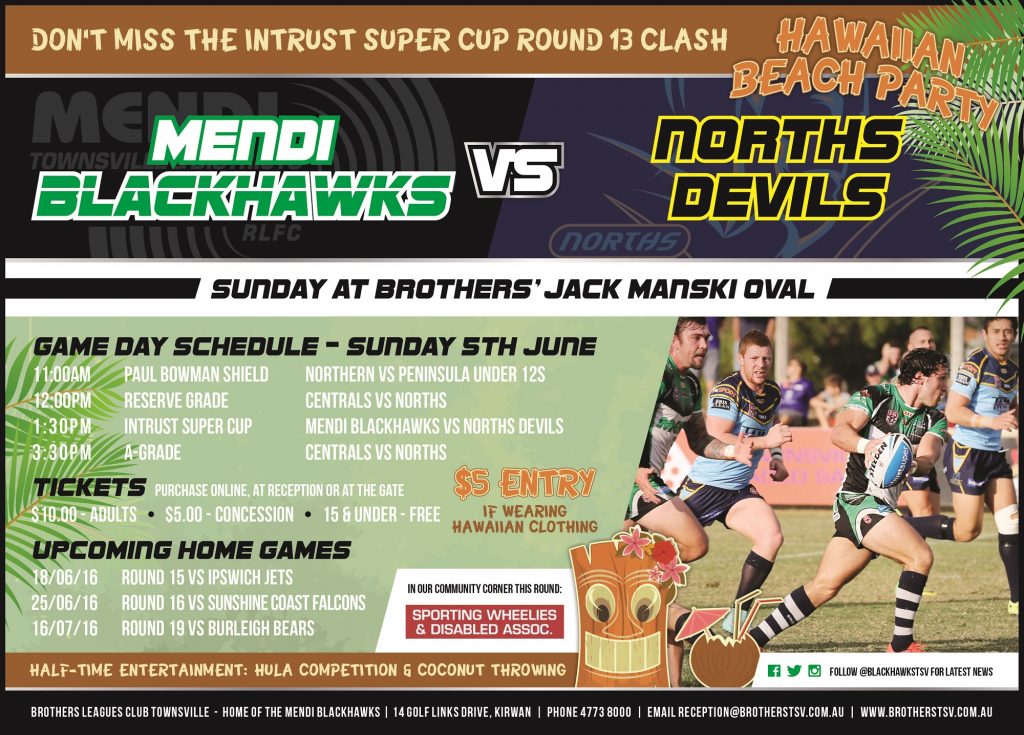