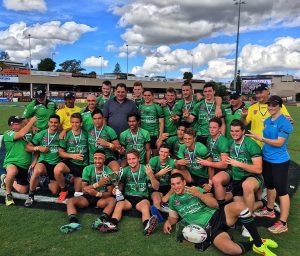 There was a sense of inevitability as the Townsville Blackhawks swooped onto Suzuki Stadium to meet the Norths Devils in this year’s Mal Meninga Cup grand final.

Despite coach Dick Walsh doing his best to hose down the speculation; his team – who are undefeated in 2016 and have won the past two grand finals in this age group – were always going to be a difficult proposition for the Devils and it proved to be the case, with Townsville claiming a 38-16 win.

The opening stanza saw the Blackhawks rack up a 12-0 lead in only 11 minutes and set the pattern for the game.

Talented hooker Julian Christian, who was amongst the Blackhawks best all day, dummied to a big backline set to his left before passing to a flying Samuel Martin who scored down the short side. Five-eighth Oscar Carter converted to give his side the early 6-0 lead.

Townsville scored what might possibly be the try of the day in the 11th minute when they took the ball to the far left of the field before spinning it quickly to the opposite corner for Michael Carroll to score. Carter converted and the score was 12-0.

The Devils were their own worst enemy in the early exchanges with penalties and dropped ball gifting the Blackhawks plenty of possession and position.

A team that is as experienced and talented as this Blackhawks one does not need that many opportunities. Carter slotted a penalty goal in the 28th minute to take his side to a 14-0 lead before dangerous fullback Marshall Hudson scored.

Man of the Match Duarne Dempsey broke the Devils defence with a prodigious fend before racing 40m and offloading to his fullback for the try. Carter converted again and the Blackhawks had a 20-0 halftime lead.

Christian was at it again in the opening minutes of the second half with a beautiful pass from dummy half to put Jayden Stephens over, and with Carter’s conversion; the Blackhawks had the game sealed at 26-0 with 31 minutes to go.

Norths finally got on the board in the 45th minute with captain Unngoorra Harbour scoring. However, 10 minutes later, Dempsey struck back for the Blackhawks and with Carter continuing his metronome-like kicking display it score was 32-4.

With much improved discipline and ball handling, the Devils were mounting a much sterner challenge in the second half and their effort was rewarded with tries to Kyle Patterson and Kalem Hart. Gerome Burns also landed a conversion to make up their 16 points.

However, this was the Blackhawks day and it was fitting that they should score the last try of the day through prop Emry Pere, which Carter converted to take the final score to 38-16.

Dempsey was the Blackhawks best on the day and thoroughly deserved to be Man of the Match, while Christian and Kurt Wilshire were also very good.