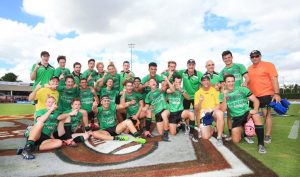 A penalty goal after the siren from halfback Adam Cook saw the Townsville Blackhawks snatch a thrilling victory over Souths Logan in the Cyril Connell Cup state final today.

It completed a stunning second-half comeback from the Northern side who trailed 18-4 at halftime after the Magpies produced a great opening half performance.

However, Souths Logan got off to the worst possible start with a knock on from the kick-off – but they were able to defend their error and were soon on the front foot when co-captain David Fifita went over in the third minute.

They thought they were in again soon after – but for a forward pass ruling.

The game soon settled into a grind – but it was still Souths Logan will all the running and they had another try on the board after a fantastic effort from prop Geordie Brand.

After his team made a break up the middle, he got the ball and was able to break a few tackles, keep running and reach out to score for a 12-0 lead with 13 left in the half.

They got one more – and it would be their final try of the day – when a run from a scrum win was topped off by a try from Magpies fullback Ioane Seiuli fought his way over for this team to plant the ball over the line.

The try was converted by winger Jake Rowles to give the side what looked like an imposing 18-0 lead.

But what proved to be a vital point in the match, what was nearly a 24-0 scoreline at halftime was instead 18-4 when Souths butchered a chance with a dropped ball and the Blackhawks were able to score an opportune try at the other end. They soccered the ball ahead and hooker Mitch Fogarty followed the ball all the way to score an important try for his side.

Townsville started the second half with a renewed vigour and were aided in their quest to pin back the deficit by a Souths error close to their line, which handed them the ball.

They made sure they used their opportunity with winger Kane Banset going over. The conversion attempt from Cook hit the post on the way in for an 18-10 scoreline with 25minutes to go.

The Magpies tried to reassert some of their early dominance, and the 15 to go – they thought they had extended their lead; but some good Townsville defence pushed them out over the sideline when they were attempting to dive over to score.

Townsville were coming home strong and their next try came when second rower Isaac Locke chased through a little kick ahead and he was over again with just over four minutes to go to lock the scores at 18-18.

While this conversion missed from Cook, he landed his next attempt after the final siren when his side were awarded a penalty in the final minute of the game to claim the state title.