Excitement is certainly building for this weekend’s blockbuster clash which sees the Townsville & Districts Mendi Blackhawks travel to National Football Stadium in Port Moresby to take on the PNG Hunters.

In what is sure to be a tight tussle the first placed Mendi Blackhawks will line up for the first time in Season 2016 against the third placed Hunters who are currently just one win behind them on the Intrust Super Cup ladder.

Season 2015 saw the Hunters with the upper hand in the regular season, winning both home and away games against the Mendi Blackhawks in Round 11 and Round 20. The Mendi Blackhawks were able to exact their revenge when they last met in the 2015 Semi Final but will surely be prepared for a big challenge this weekend. 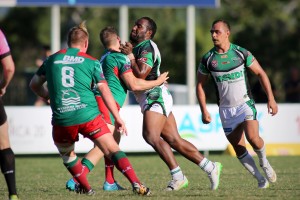 The man they call “Freight Train” scored his maiden try for the Mendi Blackhawks in their Round 5 win over Tweed Heads and still has a strong following in his home country. The XXXX 2014 People’s Choice Award for Intrust Super Cup was a star for the Hunters in season 2015 and also represented his country in May 2015 when the Kumuls took on Fiji on the Gold Coast.

Coach Woolf said that Willie is very excited to head home and will have plenty of family and friends on hand to see him take to the field in his new club colours.

“This game presents a challenge that our players are really looking forward to. We built a healthy rivalry and strong respect for PNG last year through three very tightly contested games.”

“I’m sure this game will be no different and we are hoping it is a capacity crowd to add to what will be a great game between two teams in good form.”

“Our PNG connection of Willie Minoga and Rhyse Martin are particularly keen to get over there and perform well in front of their friends and family.” He said.