The Townsville & Districts Mendi Blackhawks return to Jack Manski Oval this weekend to face an opponent who played out a very similar game in Round 2. The Souths Logan Magpies allowed the Redcliffe Dolphins to rush out to an 18-6 lead before turning it on in the second half to score three unanswered tries to win the game 24-18 in much the same way as the Mendi Blackhawks overcame the Ipswich Jets in Round 2. It was an impressive finish that demonstrates the commitment and ability of the visitors.

Led by five-eighth Phil Dennis who has a mountain of experience and recently clocked up his 211th match for the club, the Souths team have a strong young Bronco contingent of 6 players in total. Part of this contingent makes up the Magpies spine which includes halfback Sam Scarlett, fullback Jamayne Isaako and experienced hooker Travis Waddell.

Coach Kristian Woolf is expecting a physical battle, “They have a big forward pack and we will have to match them physically through the middle.”

“They have come off a real good win and they will present a tough challenge but I was pleased with our commitment last week in the second half and I’m certain we can reproduce that effort this week.”
Woolf has named almost the same starting seventeen as round 2 with the exception of Lorenzo Maafu wearing number15 and Kieran Quabba dropping off the bench.

It will be a full day for rugby league lovers as the younger Townsville Blackhawks sides will also be taking to the field to play the Mackay Cutters in the Cyril Connell Cup and Mal Meninga Cup at 12:30pm and 2pm respectively. Both Townsville Blackhawks sides are coming off two wins from two matches and will be equally determined to clock up a hat trick of wins this early in the season.

Gates open at 11:30am and tickets are available online, at Reception of Brothers Leagues Club or at the gate. The Mendi Blackhawks take on the Souths Logan Magpies at 4pm. 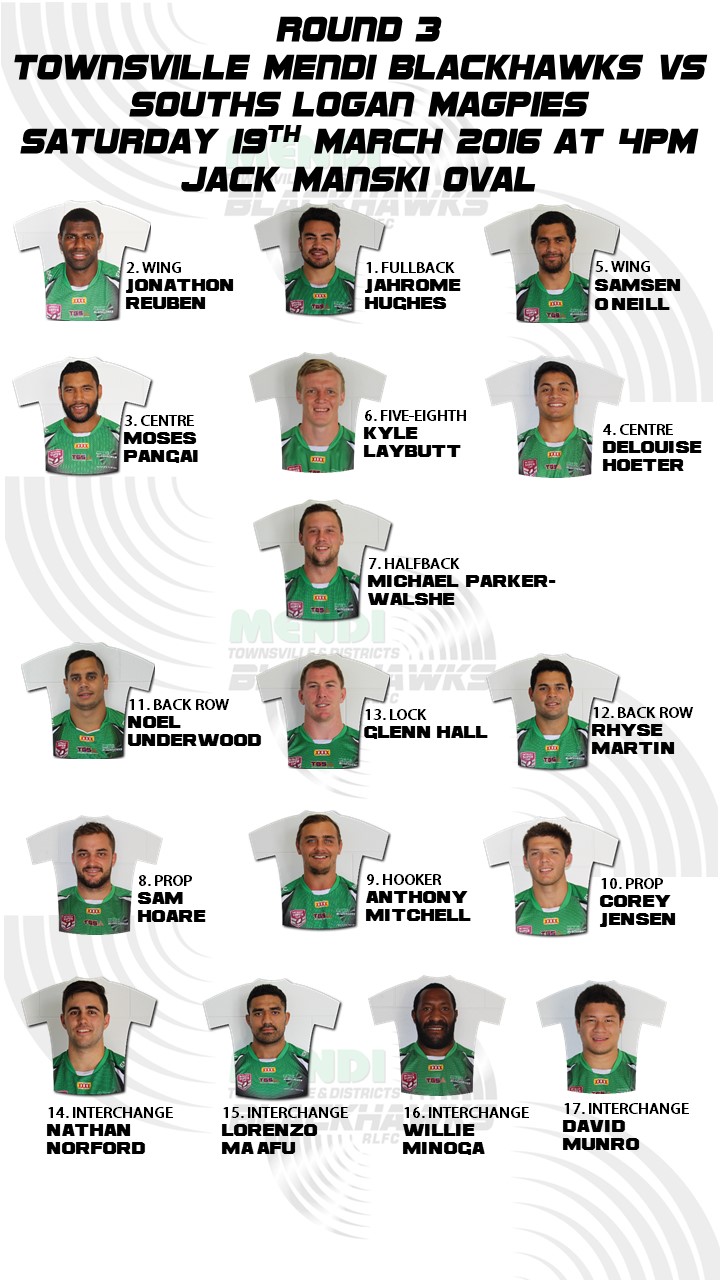