North Queensland’s best NRL players will be making a rare mid-week appearance at a local football ground tomorrow evening as the North Queensland Cowboys take to the field in their final hit out prior to boarding a plane to the World Club Challenge in England.

The Cowboys are expected to name a near full strength side which is sure to please fans who will be able to experience the players up close and personal at the home of the Blackhawks, Jack Manski Oval. It will be a match for the entire family to enjoy as ticket prices have been set at the affordable price of $5.00 per adult and $3.00 for concession card holders. Children under the age of 15 are free.

Prior to the main game there will be a match at 5:00pm featuring the Townsville Blackhawks Cyril Connell Cup side taking on an U16/U18 composite Northern Territory representative team.

Gavin Cooper and Delouise Hoeter today faced the media as part of a joint media opportunity to promote the exciting trail. Tickets will be sold at the gate from 4:15pm Thursday 11th February. There will be no pre-sale for tickets to the game. Tickets will be limited and because there will be no tickets pre-sold it is advised that fans get to the match as early as possible.

Cooper was certain that the Cowboys will not be holding anything back despite the match being a trial, “We will certainly be taking it seriously, as will the Blackhawks. We won’t be going out there with any half efforts.” He said.

Coach Kristian Woolf said his players were prepared and motivated for the match up, “This is an outstanding opportunity for our team to take on the best rugby league side in the world. Not only as a team but also as individuals. It presents our players with a chance to test themselves against genuine NRL players and see how they measure up.”

“It will certainly be a big step up from last week’s trial but I think it’s a challenge our boys will relish.” He said this morning.The Townsville & Districts Mendi Blackhawks have named a squad that will welcome back Rhyse Martin and Pangai as well as Cowboys allocations Jahrome Hughes, Sam Hoare and Kyle Laybutt. The Mendi Blackhawks players are looking forward to testing themselves against one of the benchmark sides in the NRL in their final trial prior to the beginning of the 2016 season proper.

Out of town fans won’t miss out either as they will be able to access a livestream link for the match via our website. Keep your eye on our website and social media for more information tomorrow. 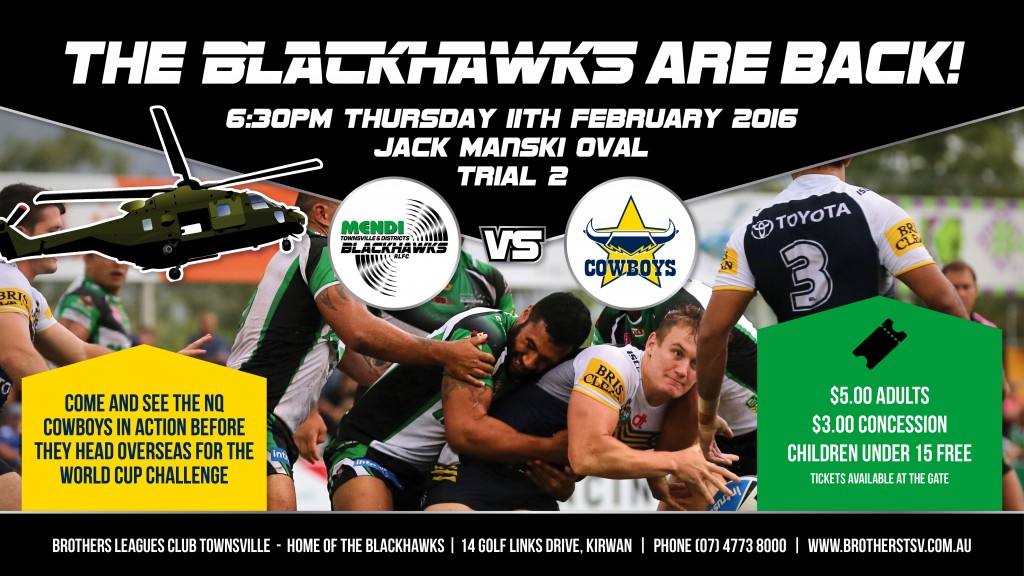