Fullback Jahrome Hughes had an outstanding year by anyone’s standards, selflessly switching between five-eighth and his regular position at the back as the team required it. Hughes, who came to Townsville after spending three years with the Gold Coast Titans, was the ultimate support for the players around him offering up an impressive 29 try assists and 23 line break assists throughout the season. He also scored 9 tries of his own and averaged 134 metres per game.

Hughes form has earned him another shot at the big time after he signed a 1 year deal with the NRL Premiers, the North Queensland Cowboys. He will begin pre season training with the NRL club in December.

Hughes was named Fullback of the Year at the QRL Intrust Super Cup Awards in September and on Thursday 8th October at the Townsville & Districts Mendi Blackhawks inaugural presentation night Hughes also walked away with two further accolades, the Back of the Year for 2015 and also the Player’s Player award.

“The Player’s Player award is a special one because it’s decided by the blokes I play alongside every week. It means I am doing my job if my team-mates are happy with me.”

“I was surprised and very honoured to walk away with two awards for the night. Especially with the talent we have in our backline.” Hughes said of his two awards. 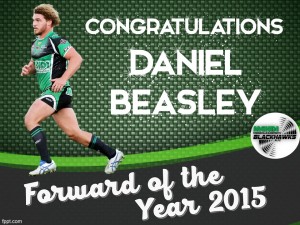 If there is one player who has been integral in building a culture and establishing a standard for the Mendi Blackhawks in their first season it is inaugural Captain Daniel Beasley. Beasley has worked tirelessly since signing with the club in October 2014 to be a leader amongst his peers.

The definition of leading by example Beasley’s statistics speak for themselves with an average of 29.5 tackles and 104 metres per game and a tackle efficiency rate of 90.6%. Beasley came away with the Prop of the Year award at the QRL Intrust Super Cup awards and was also nominated for the Intrust Super Cup People’s Choice Award.

He also reached his milestone 50th Intrust Super Cup match, represented the Queensland Residents in their winning 2015 campaign and was a more than worthy recipient for the Mendi Blackhawks Forward of the Year award. Coach Kristian Woolf praised his captain’s leadership and dedication when he presented the award. Beasley was quick to deflect the praise onto his troops, “I’m very humbled to receive the award with the calibre of players in our team and the outstanding year that we have had. There were many other players worthy of receiving the award.” The Captain said following presentations.

Neville Costigan returned to Australia from the British Super League with the intention to focus on a life outside of football. The former Brisbane Broncos, Canberra Raiders, St George and Newcastle forward had plenty of interest from NRL clubs but chose to sign the the Mendi Blackhawks on a two year deal. The 193 NRL and UK Super League game veteran has proven to be one of the main drivers that propelled the fledgling club into the Intrust Super Cup Grand Final in their first year.

His experience and ability to out muscle his opposition has been invaluable for the Mendi Blackhawks in season 2015. Costigan notched up 50 Intrust Super Cup matches during the season with an average of 24.3 tackles per match with an efficiency rate of 90%. The lock stated at the beginning of the season that he “wanted to be in the grand final” in his local Mackay paper, his hope for 2016 will surely be to go one better.

“I am honoured to recieve the Player of the Year award, there are plenty of guys in our team that could have easily walked away with the award so I am very pleased.” Costigan said.

“I would like to thank the coaching staff and the boys for a great year. I’m looking forward to next season, though maybe not the pre-season so much.”