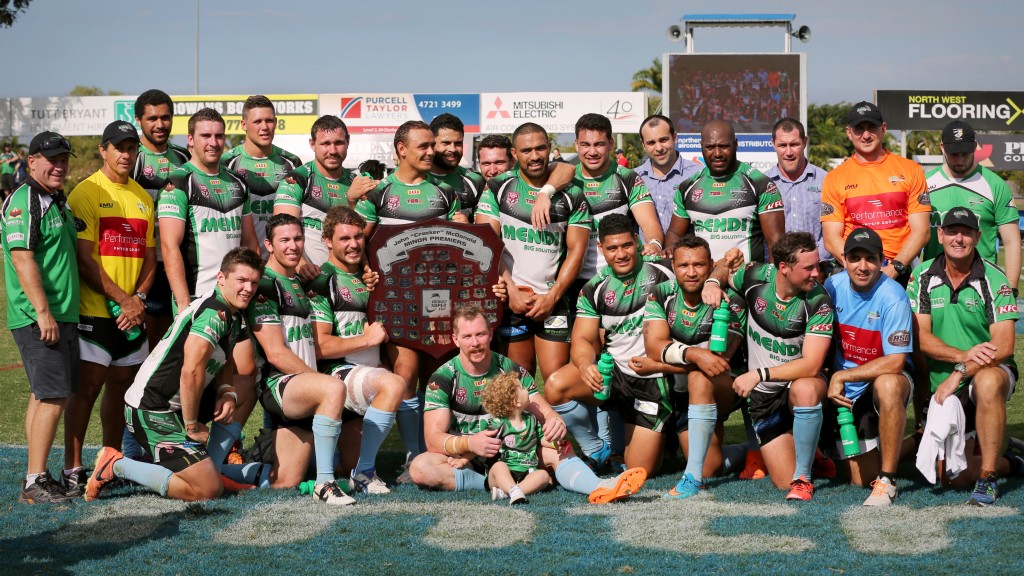 Townsville & Districts Mendi Blackhawks have today secured the 2015 Intrust Super Cup Minor Premiership after taking down the Redcliffe Dolphins 46-22 in Round 25 TURN TO ME round at Jack Manski Oval in Townsville. The blockbuster match was screened on Channel 9 and halfback Michael Parker-Walshe took out XXXX Man of the Match.

On a hot day in North Queensland the Townsville & Districts Mendi Blackhawks and the Redcliffe Dolphins walked onto the field in Townsville side by side in a show of solidarity in support of “Turn To Me” Round raising awareness for male depression. The players wore Turn to Me t-shirts that they threw to the crowd along with blue socks to mark the occasion.

After the pre-game festivities were complete it did not take long for the on field action to begin. Two  and a half minutes into the game the Mendi Blackhawks crossed the line for first points of the “Turn to Me” Round 25 clash against the Redcliffe Dolphins. Three minutes later the home side experienced a double blow as Captain Dan Beasley left the field with a leg injury and the Dolphins scored an easy try through Joe Bradley.

The Mendi Blackhawks next set with the ball saw them go 80 metres downfield only to bomb a certain try with a dropped ball. The visitors made it look like déjà vu at the opposite end as they similarly dropped the ball, when they looked certain to score in the following set.

With their captain on the sidelines the Mendi Blackhawks needed to lift and despite some errors and defensive pressure from the Dolphins the home side managed to score back to back tries extending their lead to 18-6 by the 19th minute. The twelfth minute saw Neville Costigan use his feet to get over the line and Michael Parker Walshe was quick to follow pushing his way through some feeble goal line defense minutes later.

Ten minutes before the break a Rob Lui cross-field bomb lead to an opportunistic try for Tom Humble taking the score to 24-6. The following few sets saw both sides fatigued and coming up with errors due to some heavy hitting defense.

Some classy work from Luke Capewell put Josh Beehag into space to give the Dolphins hope just prior to half time. The Mendi Blackhawks kicked the ball out on the full the following set to hand the Dolphins the ball in excellent field position.  The visitors didn’t waste the opportunity as Taylor Brown scored to take the half time score to 24-16 and force themselves back in the match.

The opening minutes of the second half saw an intense arm wrestle as both sides started with plenty of energy and intensity.

A penalty at the end of the tackle count in the 45th minute gave the Mendi Blackhawks an excellent opportunity as they were gifted a repeat set from 10 metres out. Young backrower Corey Jensen did his best to force his way over only to be denied by the video referee due to a double movement call.

Just minutes later the video referee was again called upon to decide on a runaway effort from Tom Humble, but halfback Parker-Walshe was deemed to have touched the ball in effecting a tackle and the Mendi Blackhawks were again denied a four pointer.

It was a case of third time lucky for the home side though, as Rhyse Martin stormed onto a great Parker-Walshe pass to finally score a try and extend the Mendi Blackhawks lead to 14 points at the 51st minute. It only took two minutes for the Dolphins to hit back via interchange player Tom Geraghty closing the gap on the score board to 8 points at 30-22.

The home side needed to be next to score to shut down the Dolphins chances of a comeback and they delivered back to back tries in the next few minutes. The first came as Rob Lui took the ball to the line off the back of a Rhyse Martin offload to eventually deliver the ball to veteran forward Glenn Hall. Hall showed some surprising speed on his way to the line taking the score to 36-22 with 20 minutes left to play. The five eighth was also involved in the next try as he turned the ball back inside to speedster Zac Santo who crossed for his 26th try for the season and second of the day.

Post-match Coach Kristian Woolf was full of praise for the younger members of his team highlighting Corey Jensen and Samsen O’Neill for stepping up and making solid contributions. Woolf was also equally pleased with experienced campaigners Michael Parker-Walshe and Neville Costigan who steered the team around the paddock in the absence of Captain Dan Beasley.