Blackhawks to touch down in “the Towers” 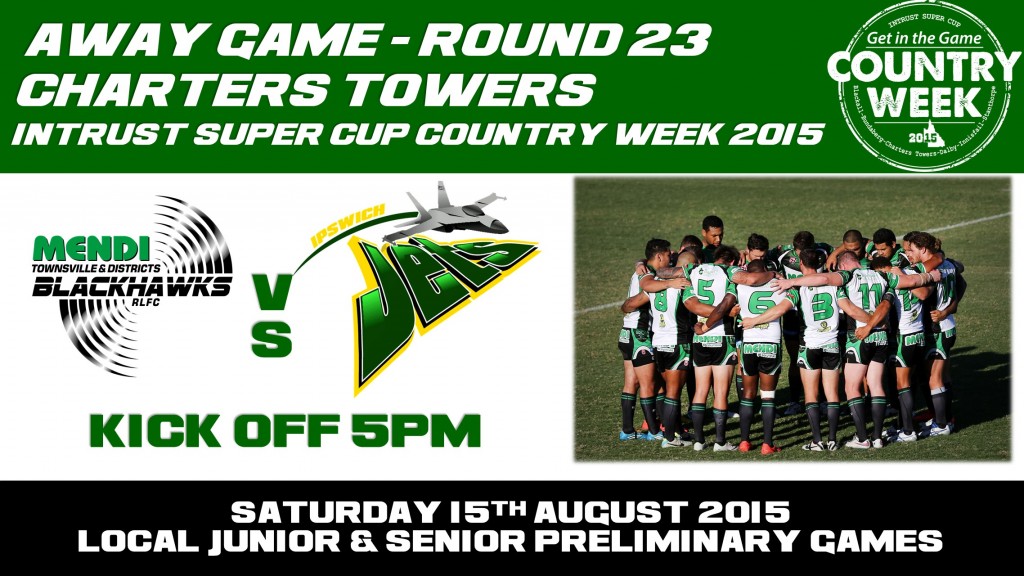 On Saturday the 15th August 2015 the Townsville & Districts Mendi Blackhawks will face the Ipswich Jets in Charters Towers as a part of the Intrust Super Cup Country Week. Country Week is a partnership between the Queensland Rugby League (QRL) and the Queensland Government’s Get in the Game initiative.

The aim of the alliance is to provide a unique opportunity for Intrust Super Cup teams to engage with local rugby league clubs and regional communities. The week offers both participation initiatives and economic benefits for the regions.

“The Queensland Government has committed $100,000 over two years for Country Week, which forms part of the Get in the Game initiative aimed to support grassroots sport and recreation,” Minister Byrne said.

“Regional Queensland is the heartland of rugby league and promoting opportunities for our regions to showcase their communities to the rest of the State is so important.

“Events such as Country Week also encourages our kids to get active, while also having fun.”

The Mendi Blackhawks will be traveling west to Charters Towers on the Friday prior to the match in order to take part in some Junior Rugby League events at the local rugby league club. The team will also have an open training session at Bill Lewis Oval on Friday evening so the community will have an opportunity to watch the players go through their Captain’s run prior to the Round 23 match.

Local fans will be treated to a full smorgasbord of rugby league as the Charters Towers Miners will host a Super Saturday on the 15th August with both local junior and senior rugby league being showcased leading up to the Intrust Super Cup match between the Townsville Blackhawks and Ipswich Jets at 5:00pm.

The club is offering a Supporter Bus from Townsville for the match which will depart around lunch time and return following the match. For more information please visit our Facebook page. There will be limited seats available. Sponsors will also travel to the match to support the Mendi Blackhawks in a must win game against the Jets.

Mendi Blackhawks Operations Manager Adrian Thomson is certain the Round 23 match will not only be highly entertaining but also beneficial for the clubs, the competition and the game of rugby league as a whole.

“I think Country Week is a tremendous concept. Taking the Intrust Super Cup to regional areas is hugely important for rugby league in terms of both participation and reaching our fans.” he said.

“It’s especially important for us in our inaugural season to visit the regions in our footprint and Charters Towers is one of those regions so this is something we are certainly looking forward to.”

“Our squad trained at Bill Lewis Oval earlier in the year and we had a good response from the Charters Towers community so we expect this match will be the same.”

“With the Jets in 3rd place on the ladder and the Mendi Blackhawks in equal first the game is going to be high quality for sure. Both teams are right in the hunt for the finals and will be out to snatch the win away from home.”

Further information including the schedule for the day will be posted at a later date.