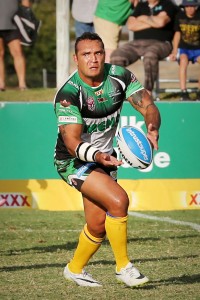 Round 19 will see Neville Costigan play his 50th Intrust Super Cup game when he runs out for the Townsville & Districts Mendi Blackhawks against the Easts Tigers.

Costigan has had a distinguished NRL career since he last played in Queensland’s premier Rugby League competition for the Toowoomba Clydesdales more than a decade ago.
The hard running lock has played 169 games for four NRL clubs including the Brisbane Broncos, Canberra Raiders, St George Illawarra Dragons and the Newcastle Knights.

During his time away for the Intrust Super Cup (formerly known as the Queensland Cup) Costigan has also notched up 6 games of State of Origin, 6 games for the PNG National team and enjoyed a stint in the UK for Hull KR.

Since arriving in Townsville on a two year deal Costigan has become the backbone of the fledgling Intrust Super Cup outfit, taking on a leadership role both on and off the field. His vast NRL experience has certainly contributed to the Mendi Blackhawks impressive form this season with Costigan slotting in at hooker and half when required during games where injury has hit the side hard. 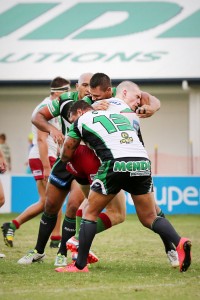 His knowledge and past in professional rugby league has enabled Costigan to provide a calming influence in pressure situations which will prove especially valuable come September. Costigan has not missed a game so far this season for the Mendi Blackhawks and his on field form has made it clear that his hard-earned reputation as an enforcer still fits like a glove.

The forward has credited feeling settled and close to his family as well as a strong bond with teammates for his current form, “I’m really enjoying my time here with the Blackhawks, it’s pretty special to be a part of something like this in the first year.”

“The staff at the Blackhawks have built a really great culture and we have all bonded really well. It’s also great to be close to home (Mackay) and settled here in Townsville so that helps you play better footy for sure.”

“It’s nice to celebrate a personal milestone and I feel privileged to be a part of the 50 club; but we have a tough road trip ahead this weekend so I just hope we can play well as a team and get the result.” Costigan said.

“Along with our other leaders in Dan Beasley and Ant Mitchell, Neville have been instrumental in developing a strong club culture that will help us be successful into the future.”

“We are privileged to have him in our team and we look forward to honouring his achievement on contributions with a strong performance on Sunday.”

Currently sitting on top of Intrust Super Cup ladder after 18 rounds the Mendi Blackhawks are in no doubt that the job is far from done. The pressure will be on for the next two rounds as they face two top five teams in the Easts Tigers and the PNG Hunters, both at home.

The Easts Tigers come into Round 19 off a confidence-boosting win over the fourth placed Ipswich Jets at Tapout Energy Stadium.  The Tigers held off the fast finishing Jets to take out a thrilling win 18-16.

Heading to the Tigers home ground is always a tough assignment and Mendi Blackhawks’ Coach Kristian Woolf is expecting a tight match this weekend, “This game is the first in a two week period (that) we as a club are really looking forward to.”

“Not only do we get the opportunity to take on two of the best teams in this competition, we also get to do it at their home grounds.”

“Easts have certainly been one of our greatest challenges this year and will be even tougher this week at home and coming off some strong recent performances. This week’s game will give us an excellent indicator into how we are travelling at this time of year.”

The game will be screened on Channel 9 this Sunday as the game of the round. Tune in from 2pm.